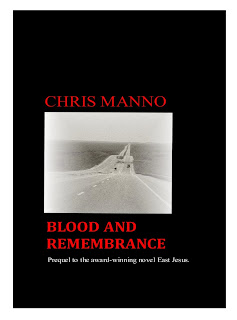 Blood and Remembrance is the prequel to the award-winning Texas novel, East Jesus. This new, stand-alone story rampages from the west Texas plains to Huntsville's Death Row and back. Cowboys, ranchers, driven oilmen, desperate convicts and headstrong women grapple with truths of the heart, of life, and the coming of age in a dramatic struggle you'll live yourself and never forget.

“’Well,’ Randy said, gauging the clouds stacking themselves to the west like a promise they couldn’t keep...”

You know how it feels when there’s an afternoon, late spring storm brewing -- the clouds are roiling, the pressure changes, there’s electricity in the air? There might be a little break in the heat or in the clouds, but the sky is darkening, darkening with a likely funnel or two in the works. The waiting makes you uneasy, anxious even.  THAT is how it feels reading Blood and Remembrance by Chris Manno.  Storms are swirling around the lives of a wide cast of characters, and it seems unlikely any of them will survive unscathed.

Blood and Remembrance is the prequel to East Jesus, which I read about two years ago, and which I now need to re-read.  BAR reveals the juicy small-town tidbits that clarify how the characters ended-up in the lives they lead in EJ, some seventeen years later. Some characters were messed-up and dysfunctional from the start; others had some light and hope in their lives, and goals for bigger and better things. But the oppression and consequences of bad choices and lack of ambition dim or extinguish most everything good.

Sound grim? It is. Just as East Jesus has a mind-blowing ending, Blood and Remembrance begins with a brutal, attention grabbing start that has the reader reeling. From Huntsville to Rattlesnake Gulch, Texas, the characters in the story are their own worst enemies and seem to be on a crash-course with their bleak destinies. Readers will find themselves wanting to shout, “DON’T DO IT,” over and over again. And since the story is told from multiple points of view, each chapter brings new opportunities and new train wrecks looming on the horizon.

“It ain’t a lie if you told ‘em both the same thing,” Shirl said with a hint of hope but a side of regret. “It’s just what they both believe to be true.”

Grim? Yes. Bleak? Yes. Riveting? Absolutely. The characters are richly drawn and so real that you carry their troubles with you when you aren’t reading. Author Chris Manno fleshes-out the quirks and complications of each personality, and he layers those over descriptions of time and place that put readers right into the story. Manno makes liberal use of similes and metaphors, but sometimes the frequency takes the punch out of those that are superbly done. He writes some beautiful, truly lyrical descriptions and has some that are so familiar, I snorted at the recognition.

"Mrs. Hogg kicked the organ into gear with a wheezy note that chugged into the hymn like an engine flooded, tentative, ungraceful, but eventually firing and catching hold."

I had some trouble reconciling the timeline in BAR. With mentions of Texas Governor Connally, Old Sparky, Fort Worth’s Ol’ South Pancake House, T.V. shows, and songs playing on the radio, it seems the story is set in the early sixties. But EJ is set in 1968 or 1969, I think (really need to re-read), which doesn’t work with the ages of the characters. There are some places that I needed more information to sketch out some of the vague existing relationships and to explain why characters behave as they do. (Truly, I think character Verlene could have a prequel story to this prequel story!)

The Grammar Policewoman in me struggled a bit. (Curse or a blessing, the badge is always on.) I reviewed a "near final" ARC of Blood and Remembrance, and it was a long way from being ready for prime time due to numerous typos and usage errors. My hope (and expectation) is that the final version will be cleanly edited, but the SPAG issues detract and distract nonetheless. (I imagine I will buy a final print copy (*Must always have same format and complete sets on the shelf. MUST.*) and will update this review accordingly.

Thank you to the author and Lone Star Book Blog Tours for providing me an eBook ARC in exchange for my honest opinion – the only kind I give. 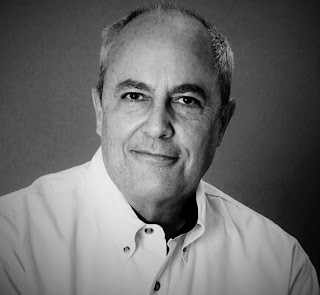 Chris Manno of Fort Worth, Texas, earned a doctorate in English from Texas Christian University and teaches writing at Texas Wesleyan University.

East Jesus, his first novel, was named “finalist” (second place) for Best Fiction of 2017 by the North Texas Book Festival. The novel takes a close-up, visceral look at West Texas life in 1969 and the good folks who lived it, grappling with notions of family, patriotism and violence, both domestic and in a far-off, unpopular war.

Blood and Remembrance is the prequel to East Jesus, tracing the roots of the main characters in both books, examining the harsh but classically All-American story of life in the Texas panhandle.

Manno is also the author of a third novel, Voodoo Rush, winner for Best Fiction of 2018 by the North Texas Book Festival, and a collection of short stories titled Short Fiction for the Impatient Reader. Both books are available from White Bird Publications of Austin Texas. 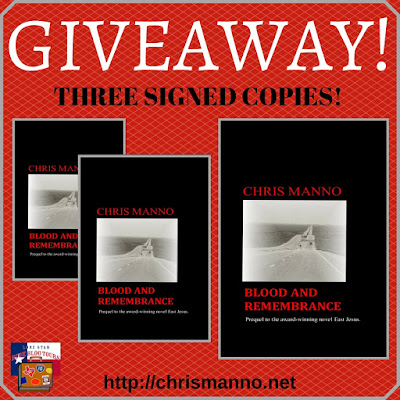