In the turquoise waters of the Caribbean, something lethal is on the move.


Scuba divers travel from all over the world to visit the little island of Bonaire, with its crystal-clear waters and a host of beautiful marine life. After three years in the “Diver’s Paradise”, divemaster Boone Fischer thought he’d seen it all; but on a routine afternoon dive, he spots something that will turn his tranquil life upside down.

From the arid shores of the ABC Islands to the tropical jungles of Venezuela—from the ocean depths of the Southern Caribbean, to the lush islands of the Northern Leewards, Deep Shadow takes Boone and the reader on an action-packed adventure filled with danger and suspense.

"The age-old adage of ‘write what you know’ becomes very important when you write about a technical subject like scuba diving. When you get all the details right, and throw in just the right amounts of action, humor, romance, and suspense, you have a novel like this."                      - Wayne Stinnett, bestselling author of "Fallen Out".

✪✪✪✪
HALL WAYS REVIEW: Audio book review. In Deep Shadow, prepare to live vicariously via the stunning setting of the Caribbean islands: there’s the laid-back vibe of the beach side bar and a sunset cocktail; there’s the calm, crystal-clear water calling for exploration; there’s the underwater and otherworldly sea life to amaze and enchant. But this is no travelogue. Quite literally, beneath the tranquil surface lurks danger and ugliness – and these are the things that make author Nick Sullivan’s Deep Shadow a real page-turner.

Sullivan has done his research and knows his stuff. Readers will learn about the processes of diving, how sound travels, and how size is distorted in water; about submarines and sub-machine guns; about drug trafficking and drug lords. What’s great is that all the details and factoids come about organically within the story without being preachy or info-dumpy. These details move the story forward, making it reminiscent of The Deep by Peter Benchley (including a wicked moray eel).

There are layers to Deep Shadow, which make the story more interesting. There are different bad guys with different motivations and plans for getting what they want – violently and without remorse. All the while, there is this team of happy-go-lucky divers (including main character Boone Fischer) who just want a good day in the water, but who step-up when those waters are muddied by blood and greed. A lot of the story is spent building to the certain collision of the good with the bad. Readers know it’s coming, but they don’t know when, how, or what it will mean in the grand scheme of things.

Deep Shadow is primarily action with the narrative alternating chapters told from the terrorists’ viewpoints and Boone’s. This format, along with the relationship blooming between Boone and Emily, provide a respite from the tension and terror brought through the international field of bad guys. (Side note: it’s difficult to get a handle on the names of these characters when reading with your ears.) Emily brings levity to the story – she’s a hoot – and it’s fun to watch Boone ignoring the signals and denying his feelings for her. There are not a lot of females in the story, but Emily’s personality fills that gap, and it will be interesting to see if future installments in the Caribbean Dive Adventures series flesh-out her character. It feels like there’s more to her than meets the eye.

Author Nick Sullivan is also the audio book narrator of Deep Shadow. His pacing is even, and he is consistent in voicing the numerous characters so that listeners can tell them apart. I don’t know if his accents are accurate, but Sullivan manages to keep the Russian distinct from the Venezuelan distinct from the middle-eastern (I missed where the ISIS terrorist was from). The voicing of Emily is also consistent, but I am not a fan. Every time she speaks, it feels Monty Python-ish to me – an exaggerated accent that sounds like a man trying to sound like a woman. And though the word choices are correct and delightfully British, the accent is off. To be fair, there is mention in the story that Emily is from a specific area of London, so it’s possible that area has a distinct dialect (like Cockney), and the accent is spot-on. Fortunately, Emily is such a larger-than-life character, that it’s easy to roll with it.

Since I read with my ears, I cannot speak to the editing, but the writing is engaging. Dialogue is natural, place and characters are vibrant, tension is high. There are a few sequencing issues that create a little confusion in the story, and some scenes could use more development, but these are not deal breakers. The author’s Afterword provides some interesting back-story and information about the research process, so that’s worth a listen, too. Overall, Deep Shadow is an action-packed (boat) ride with a plot and setting that transports you to another place. I will tune-in for the next installment (because Boone’s gotta find those dolphins, right?).

Thank you to the author and Audiobookworm Promotions for providing me a audio download in exchange for my honest opinion – the only kind I give.

Born in East Tennessee, NICK SULLIVAN has spent most of his adult life as an actor in New York City, working in theater, television, film, and audio books. After narrating hundreds of books over the last twenty years, he decided to write his own. Nick has been an avid scuba diver for many years and his travels to numerous Caribbean islands have inspired this series. His first novel, “Zombie Bigfoot”, hit #1 in Horror Comedy on Amazon.

NICK SULLIVAN has been narrating audio books for over twenty years, recording over four hundred titles and receiving numerous AudioFile Earphones and Audie nominations and awards. He has worked extensively on Broadway and at many U.S. theaters. His TV credits include The Good Wife, The Affair, Divorce, Younger, Bull, Madam Secretary, Boardwalk Empire, 30 Rock, Elementary, and all three Law and Order series. Film credits include Our Idiot Brother and Private Life. Proud member of SAG-AFTRA. 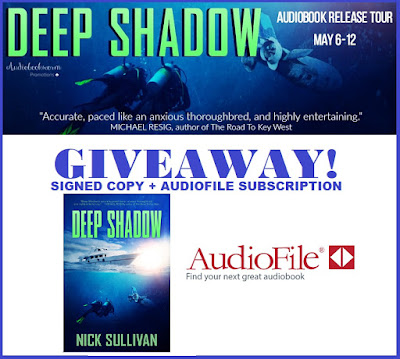