Barbara Lassiter and Susan Martinez, two New Mexico homicide detectives, are assigned to investigate the murder of a wealthy Albuquerque socialite. They soon discover that the victim, a narcissistic borderline personality, played a lifetime game of destroying people's lives. As a result, the list of suspects in her murder is extensive.

The detectives find themselves enmeshed in a helix of possible perpetrators with opportunity, means, and motive - and soon question giving their best efforts to solve the case the more they learn about the victim's hideous past.

Their job gets tougher when the victim's psychiatrist is murdered and DVDs turn up that show the doctor had serial sexual relationships with a large number of his female patients, including the murder victim.

All of his books draw on personal experiences and historical events. Joe has been judged “One of the 50 Authors You Should Be Reading" and has received 3 Gold Medals and 2 Silver Medals from the Military Writers Society of America, and The Tony Hillerman Award for Best Fiction Book of the Year in 2014 and 2016. He also writes a blog titled Everyday Heroes. See past postings at http://www.josephbadalbooks.com


You can read more about Joe on his website or email him at josephbadalbooks@aol.com

Appearing in a national Tylenol commercial in 1995 sparked her interest and The Captain’s Voice was the result. She is now an award-winning SAG/AFTRA narrator and voiceover talent and has done commercials, videogames, e-learning, audiobooks, and phone messaging for clients including Microsoft, Brilliance Audio, Johnson & Johnson, Audible, La Costa Resort, Jet Blue, Delta Airlines, Dell, Blackstone Publishing, the American Red Cross, Canadian Realtors…all the way to being the English voice for The Hotels and Casinos of Monte Carlo!

She was nominated for an Audie Award for her 5th audiobook narration (Come To Me Alive, by Leah Atwood) and went on to also earn a Voice Arts Award for non-fiction for In Movement There Is Peace, by Elaine and Joseph Foster; another Voice Arts nomination for Cyber Crisis: It’s Personal Now, by William Kieper; and recently was awarded an Earphones Award by AudioFile Magazine for Husbands and Other Sharp Objects, by Marilyn Simon Rothstein for Brilliance Audio.

She has served on the board of several charities, including Patrons of the HeArts and local Beaches Emergency Assistance Ministries (BEAM) and lives with her husband Amos in Atlantic Beach. Pam plays piano for her local church, still returns to Telluride, Colorado every summer, loves biking, golf, hiking, and-though she’s been all over the globe!- she still counts world travel among her most-loved hobbies.

✪✪✪✪
HALL WAYS REVIEW: Audio book review. You know an author has some talent when he can make you despise a character within the first few pages – or in this case, minutes, since I read Borderline with my ears. Readers meet the vile Victoria immediately and aren’t surprised when she’s brutally murdered. Readers soon realize that Victoria is just the tip of the loathsome character iceberg, and off they are taken on an enthralling police procedural murder mystery. Even better? It’s “inspired by actual events,” according to the introduction. I am IN!

With the main characters, Barbara Lassiter and Susan Martinez, both being female law enforcement officers, it’s not surprising some sexism and workplace harassment elements are added-in. Each of the women responds differently to the incidents, but it is common ground and one of the things that bonds the detectives to each other. They are a team on the job, but readers also see the personal sides of both Susan and Barbara and how they support each other in and outside of their jobs. Their relationship and the power of females supporting each other is one of the best aspects of Borderline, and I expect to see this friendship continue to grow in future installments of the series.

There are multiple story lines and more suspects and twists and turns than can be counted. But as good detectives will do, Barbara and Susan get organized and methodically pick through the clues and piece together the cases. There are a few of the detectives’ reactions that are odd, and a few clichés including the right detectives being pulled from the case (but continuing to work on it anyway), other detectives behaving badly, and the mandatory bad detective come-uppance. What saves the day, again, is the depth of Barbara’s and Susan’s characters and their personalities being brought into the story. They feel realistic in their struggles to balance their lives and their careers and in reconciling when personal and professional crash against each other.

By the conclusion of Borderline, the murders are solved (but not without a few surprises).  There is some resolution to the crises in the main characters’ lives and they are both moving forward. Rather than a feel-good, happy ending, I felt sorry for Barbara after all she had been through and where she is at the end. It should have felt hopeful, but for some reason it felt lonely. And then there is a peculiar epilogue that feels unnecessary, followed by about ten minutes of summaries of other books and series by the author, all of which took me out of the story a bit.

ABOUT THE NARRATION: What’s to love? Flawless delivery, no technical issues, and narrator Pamela Almand’s ability to distinguish the huge cast of characters’ voices so that they are all unique and identifiable. No small deed. And kudos to her for carrying-off Connie’s character. Well done. Where I struggled to enjoy the narration was in the speed (I immediately had to go to 1.25x, but this is the norm for me) and that I didn’t particularly like the voices. Granted, I didn’t really like the characters, either, and one of them is supposed to sound annoying – and oh, it is – but others don’t necessarily fit. Victoria’s voice, for example, though EXCELLENT in its snobbery, seems like it belongs to a much older woman. And some characters have odd accents. Deal breaker? Absolutely not. I enjoyed listening to her narration and would try another audio book with her at the helm.

Borderline pushes a little past the boundary of being a cozy mystery and is a bit grittier with stronger language and more sexual. Fortunately, the sex isn’t graphic, and the language is appropriate for the situations and setting.  Author Joseph Badal knows how to write characters and plot a story that keeps readers engaged and thinking and trying to figure out not just whodunit but why. I’ll be adding other titles by Badal to my TBR list.

Dark Angel, book two in the Lassiter/Martinez Case Files series, came out in early 2017 (but isn’t an audio book yet), and I plan on getting the print version to see what’s next for this detective team. If Almand narrates it, all the better because now her voices define the main characters.

Thank you to Audiobookworm Promotions, the author, and the narrator for providing me with an audio download in exchange for my honest opinion – the only kind I give.

I received this audiobook as part of my participation in a blog tour with Audiobookworm Promotions. The tour is being sponsored by Pamela Almand. The gifting of this audiobook did not affect my opinion of it. 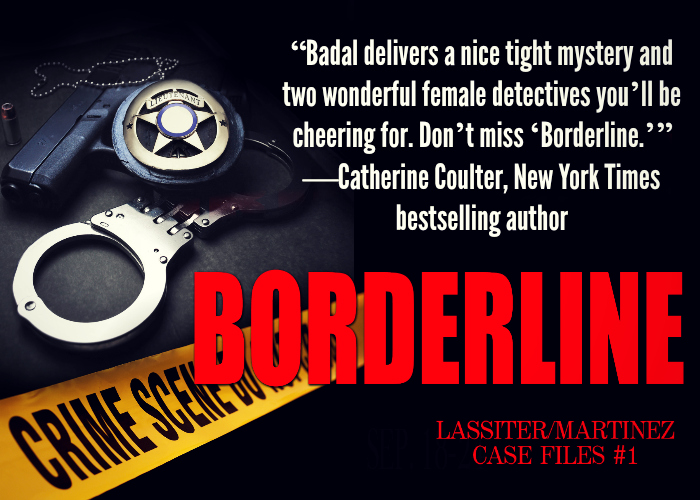 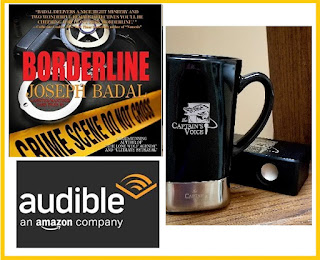