OUT AN IN
a mystery-thriller
MARIE DONOVAN MYSTERIES, #1
by
PAT DUNLAP EVANS 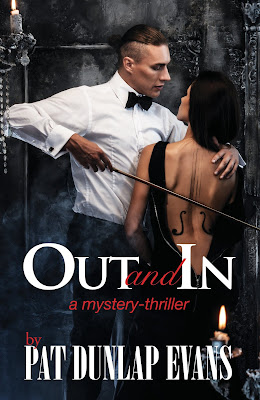 Stunning beauty and amateur cellist Marie Donovan finds herself in deep trouble after her pro-quarterback husband dives off a Dallas high rise—many say in shame after his shady investments go sour. Just months later, the grieving Marie faces capital murder charges for the death of a lecherous opera maestro. When hard evidence points squarely at her, only her best friend and defense lawyer believe her.

Marie is no stranger to struggle. During her six years as an NFL Football wife, she fends off groupies eager to take her man, all the while feeling lost in her husband’s macho culture. Studying the cello becomes Marie’s solace until her hard-drinking husband retires after an injury. Returning to Dallas, he plays with high society's money in an investment scheme until winning at all costs leaves Marie and her twin sons on the hook for millions.

Scorned by society friends, charged with murder, Marie pins her hopes on hunky defense lawyer Ryan Ingles, one of Cole's college football pals. After Ryan’s legal team discovers some of the maestro’s dark secrets, Marie and Ryan’s investigative troupe travel to exotic islands in search of clues Cole left behind. As the tropics weave a romantic spell, a corrupt offshore banker dashes Marie's hopes. She wonders if she’ll ever be free of blame...and able to claim her own place in this world.

PRAISE FOR OUT AND IN
"Out and In is the perfect mystery-thriller for the beach, a long flight, or to savor before bed...an exciting but heartfelt story about a beautiful woman who struggles to prove her innocence … As for the ending, I am still stunned.” — Lara Reznik, Amazon best-selling author of The Girl from Long Guyland and Bagels and Salsa.

"Could not put it down, once I started reading. Definitely a must-read. Look forward to reading more books from Pat Dunlap Evans. " -- five-star Amazon review by reader "Mimi"

"Awesome...flowed nicely ... definitely kept you on your toes to who actually committed the murder. The lead character was a perfect blend of hard and soft. A great read." -- five-star Amazon review by reader "Tiffany"


HALL WAYS REVIEW: From the very first lines of Out and In, readers know that main character Marie is a pragmatic, logical, and sarcastic soul. The narration is often from Marie's point-of-view, with Marie speaking directly to the reader. This approach results in a feeling that the reader is a friend -- but interestingly, not necessarily a trusted one. The narration style is only one of many aspects of the book that makes Out and In a truly unique and engaging story.

Author Pat Dunlap Evans fleshes-out some memorable characters, two of whom are dead as the story starts. Through Marie's visits down memory lane, other characters' comments and dialogue, and the deliciously biased newspaper column, "Out and In," readers are inserted into the high society scene and lifestyles of the rich, careless, and even murderous.  If you are looking for people to love and relate to, this probably isn't your book, but it is highly entertaining, somewhat voyeuristic fun. The characters' lack of scruples and snobbery and their oh-no-she/he-didn't moments make for riveting reading.

Much of Out and In is told in a conversational style, with the main character recounting or summarizing events. This sometimes takes the reader out of the action and being able to really experience the story unfolding. At other times, there is more dialogue and real-time action, and there is a sprinkling of chapters told from the killer’s point of view that readers will scour for clues. Evans includes some truly clever double entendres and saucy comments that will evoke some giggles. The book needs some additional editing and proofreading to clean-up a broad range of errors, typos, and too-long passages that are a bit of a distraction (for me) from the story, but again, the story is such a good time, many won't notice or care.

Overall, Out and In is a quick, fun, and JUICY story for those who love gossip and drama and a peek inside worlds to which most don't have access. I give it my beach-read seal of approval. 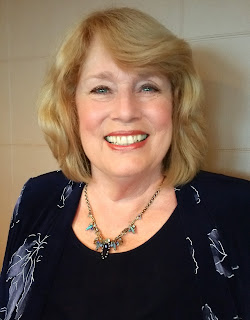 Pat Dunlap Evans was born in Michigan but "got to Texas as soon as I could," she says. Her family lived in San Antonio and later Dallas, where she attended South Oak Cliff High School and Southern Methodist University. Pat eventually completed her bachelor's and master's degrees in English at University of Missouri, Kansas City, with emphasis on creative writing. She also taught freshman writing courses as a part-time lecturer.

After a divorce, Pat stressed her way as a single mom through twenty-five years of high-stress advertising and marketing roles before retiring to write fiction and screenplays. She lives in the Lake Travis area with her second husband Dr. Bill Evans and enjoys travel, golf, volunteer work, sailing, and the chaos of the couple's combined five adult children, five grandchildren, and two cockalier dogs.

Pat has published two novels, To Leave a Memory and Out and In, with a third novel Those Who Try due out soon. 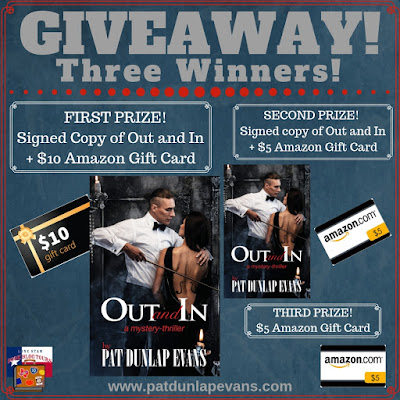