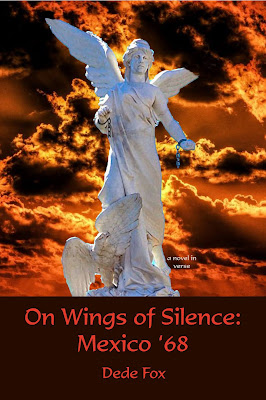 On Wings of Silence is the story of seventeen-year-old Diana Green, who travels from Texas to Mexico City searching for adventure, freedom, and romance. She finds all three.

Then Diana’s first love Guillermo vanishes during the revolutionary chaos prior to the '68 Olympics. Heartbroken, she searches for the truth about his disappearance. As police track, threaten, and abuse those who ask questions, she refuses to be silenced and risks becoming one of the missing.

Based on real events, On Wings of Silence uses historical details to bring to life the horror of the Tlatelolco Massacre, presented through the eyes of a young woman readers will care about and admire.

“This incredible story...is told in a masterful way that engages the reader with its protagonist and the other characters from the start. They are authentic. We know people like them and we care what happens to them. In Fox’s clear voice, mystery, romance and suspense build steadily to the end. Pitched toward young adult readers, this is a good read for any age.” -- Dianne Logan

✪✪✪✪✪
HALL WAYS REVIEW.  Upon finishing On Wings of Silence: Mexico ’68, my brain is buzzing with impressions. I look at the clock and wonder how I could have experienced so much in so little time. Written in verse, and coming in under 200 pages, On Wings of Silence is a quick read, but it says more than many books that are triple its size. Much more. I read the book straight through in one sitting, and I would recommend others do the same. And then read it again.

Maybe  being loved isn’t a magical charm
that saves us from a terrible fate.
Maybe our loving someone,
knowing what they’d want for us,
simply helps us become braver, stronger.

On Wings of Silence is a coming of age story and a historical novel, but it’s so much more. With the talent of author and poet Dede Fox, readers are transported back to 1968 and into the vibrant but tumultuous culture of Mexico City, just as the Olympics are set to begin. Those who know their history understand the nuances of this setting and the significance of events that happened at the Olympic games that year.  Next level scholars may even recall the political climate of Mexico and the massacre at Tlatelalco just before the games began – a blip in the history books, if mentioned at all, but a blip that becomes horrifying and feels too familiar, sickening and personal, upon reading about it in On Wings of Silence. The parallels to what’s happening now, fifty years later won’t go unnoticed: Russians influencing citizens of another country, the United States supplying weapons to fight someone else’s battle, peaceful gatherings shattered by bullets. History repeating itself again and again.

A cool shower washes away the sweat
but the claustrophobia of their lives
belonging to older men, lingers.

What’s truly amazing is that Fox makes readers see and feel so much in a scattering of words across the page. Every single word counts. Every single stanza startles the reader into awareness and makes the streets of Mexico City pop into dazzling focus.  As a novel in verse, On Wings of Silence is a visual story as much as a verbal one, where looking at each page before and while reading is an experience in itself. As seventeen-year-old Diana is allowed to explore her freedom and define herself, the structure of the verses on the page often reflects Diana’s emotions: an inconsistent spacing of words as Diana is hesitant, a compact block of text as she is angry, a cascade of letters as she falls into despair. Impactful. Powerful. My descriptions cannot do justice to Dede Fox’s story and style.

Her sweet spirit reminds me
of my unearned good fortune:
to be born in a different place
with parents who allow me so much freedom
and would never sell any part of me.

Through the characters of Diana, her roommates, and their Mexican boyfriends, readers peek into a past that shows how much the world has changed and stayed the same. These young adults are longing for things they just barely understand and for those things they understand too well. Their eyes are wide open, but their collective vision is sometimes clouded by their notions of invincibility and naivety. Dede Fox perfectly captures it all and leaves the reader longing, too. Perhaps the longing will be for bygone youth or to spread one’s wings; or perhaps the longing will be for peace and love to defeat violence and hate.  But one thing is certain: after reading On Wings of Silence, we’re all left longing for more stories from Dede Fox.

Thank you to the author and Lone Star Book Blog Tours for providing me a print copy in exchange for my honest opinion -- the only kind I give. 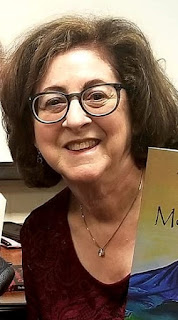 Dede Fox is the 2017-2022 Poet Laureate of Montgomery, Texas. Since 2016, she has been the NEA/DOJ Artist-in-Residence at the Bryan Federal Prison Camp for Women, where she teaches creative writing. Through Houston’s Writers in the Schools, Dede also writes with hematology and oncology patients at Texas Children’s Hospital.

The Treasure in the Tiny Blue Tin, Dede’s first novel, was listed in the 2010 Best Jewish Books for Children and Teens. Her poetry books include Confessions of a Jewish Texan and Postcards Home. Dede’s poem “Chapultepec Park: September 25, 1968,” the catalyst for this novel, won the Christina Sergeyevna Award at the Austin International Poetry Festival. 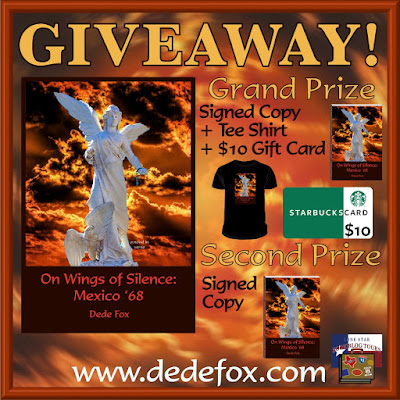