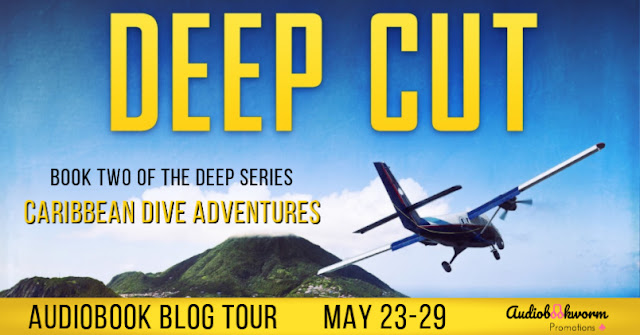 Sometimes, the brightest corners of the world can hold the darkest shadows.

Rising steeply from the turquoise waters of the Caribbean, the Dutch island of Saba is a sleepy paradise, the mountainous slopes dotted with little red-and-white cottages and the seas teeming with life. But this little oasis has a less tranquil history, many of its inhabitants having descended from smugglers and pirates.

Boone Fischer and Emily Durand are eager to explore their new home, but their peaceful lives are about to be shattered, as one of history's most powerful hurricanes begins to form - and, as if that weren't enough, a savage evil has made its way ashore. In this sequel to the best seller Deep Shadow, Nick Sullivan brings listeners to another fascinating corner of the world and sends them into a swirl of action and adventure.

HALL WAYS REVIEW: 4.5 STARS. Audio book review. In Deep Cut, as in Deep Shadow, readers get to live vicariously through the adventures of main characters Boone Fischer and Emily Durand, this time with the stunning setting of the island of Saba in the Caribbean Ocean. Ahhhhhh. With the threats of the last book left behind, the bad guys beaten back, and a relationship that’s gone from flirty to full bloom, Boone and Emily have nothing to do but spend time between the sheets, or scuba diving, or at the beach bars enjoying adult beverages, right? WRONG.  While all of the above do happen, there’s something sinister lurking, and it will affect the lovers more than they can imagine.

Deep Cut picks up a week or so after their last adventure ended, and Emily and Boone have advanced their relationship a bit. What started in the Deep Shadow as a friendship with mutual admiration and some flirty business morphed quickly, but it’s especially clear that they are in love and committed, and they complement and balance each other. It feels natural and it works. While the book isn’t focused on the romance, it is integral to the primary plot, and author Nick Sullivan brings these two characters to life.

“You about to get maudlin? Shut your pie hole.”

Sullivan makes his characters feel familiar and authentic, and their personalities are clearly defined. Boone is mostly the practical, predictable guy, who has some extra sensory perception for when things are off. His internal monologue sheds light on this and shows his sometimes-humorous side.  Emily is more spontaneous, carefree, and charismatic, and her character brings much levity to the story. She and Boone both have sharp wits and are quick thinking and clever, and it serves each of them well whether the situations they find themselves in are on land or in the water.

Deep Cut rolls along casually most of the time with interesting island tidbits and a laid-back island vibe without a lot of action. Then, BAM! High drama, and the action kicks-in to high gear with threats from beast and man and even acts of God.

BEAST. Anyone who knows me knows I have a love/hate relationship with sharks. I’m terrified but fascinated, and so at the first mention of sharks – which of course are mentioned since the divers are IN THE SHARKS’ HOUSE – my heart rate quickened.  The scenes in the water are nerve-racking enough (um, sharks’ house) by definition, but Sullivan brings in his own diving knowledge and (possibly shark-y experience) to vividly describe the scenes. It is intense! As a side note, Sullivan also does a great job of slipping in the public service announcement of reminding readers that sharks aren’t evil and what generally motivates their behavior.

MAN. Ooooh, here is another place where Sullivan excels, both in his writing and narration. While the island of Saba does have a history of pirates and smugglers, the danger of the man-made kind is truly evil – the messed-up, off-balance, psychotic kind of evil that is riveting. Readers get to go inside the mind of The Servant, and that is a scary place to be especially when you listen to Sullivan’s narration of this character. His calm and controlled delivery is chilling and totally creepy.

GOD. Okay, maybe that’s too dramatic, but the backdrop of Hurricane Irma drawing ever closer to the island really ramped up the tension. Readers feel it coming and likely know the path of destruction the real Hurricane Irma left in the Caribbean. The dread of Irma’s arrival is palpable in the writing, and it perfectly parallels the dread of what’s surely coming when The Servant makes his next move.

ABOUT THE NARRATION: Nick Sullivan’s narration is on point in this second book of the series. He’s tamed the voice of Emily so that she sounds female (and not like a man voicing a female), and he’s captured her wry sense of humor and zest for life. He does a great job voicing all the characters and their unique accents and personalities and as mentioned, he nails the creepy factor in the voice of The Servant.  There are no audio/technology glitches and the pacing and delivery are even, though a bit slow for me, so I listened at 1.25x.

I recommend readers – wait for it – dive right in with Deep Cut. It stands alone and is a quick and exciting way to kick-off your summer reading and ignite your wanderlust. Don’t miss it! Meanwhile, I will anxiously await the next installment in the Caribbean Dive Adventures. After all, I am still waiting for Boone to find those dolphins.

Thank you to the author and Audiobookworm Productions for providing me an Audible download code in exchange for my honest opinion – the only kind I give.

Born in East Tennessee, Nick has spent most of his adult life as an actor in New York City, working in theater, television, film, and audio books. After recording hundreds of books over the last twenty years he decided to write his own. Decades of scuba diving and travel inspired the Caribbean Dive Adventures. The first book in this series, the best-selling Deep Shadow, is set in the island of Bonaire. Deep Cut picks up on the little Dutch island of Saba. For more information on this series, visit www.deepnovels.com

And for something completely different, visit zombiebigfoot.com to learn about his first novel, Zombie Bigfoot, which was #1 in Horror Comedy on Amazon.

Nick has been recording audiobooks since 1994 (starting on reel-to-reel) and has been listening to them even longer. He has narrated over four hundred fifty titles in nearly every genre. 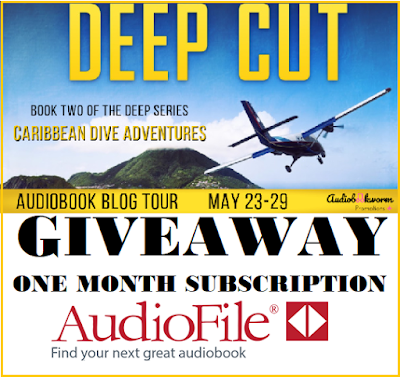 May 23rd:
Viviana MacKade
May 24th:
The Book Junkie Reads . . .
May 25th:
Momma Says To Read or Not to Read
May 26th:
Dab of Darkness Audiobook Reviews
May 27th:
Hall Ways Blog
May 28th:
Haddie's Haven
May 29th:
Jazzy Book Reviews