LANDING IN MY PRESENT
by
Mary Clark 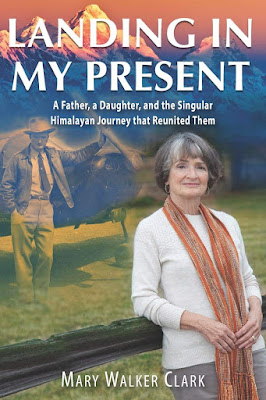 Mary Walker Clark barely knew her father. When he died, he left not only the obvious void every teen would experience, but took with him scores of Indiana Jones-style tales about flying the Hump, a treacherous series of US missions that transported supplies over the Himalayas to China during World War II.

It would take a chance interview with a pilot who had flown with her father in the war to launch a series of extraordinary journeys—into a shrouded past and halfway around the globe to India and China—for Clark to finally come to know the father whose absence had haunted her for decades.

Landing in My Present chronicles the adventures of a daughter who chose to pry open a painful past while enlarging her view of an adventurous father long thought lost.

HALL WAYS REVIEW: Reading Landing in My Present by Mary Walker Clark feels like finding a diary or scrapbook in a dusty attic, opening it up, being enveloped in the past, and not emerging again for hours.  This book doesn’t fit neatly into any one literary box: it’s part memoir, part biography, part travelogue, and a splash of speculation. Calling it unique only scratches the surface.
“This journey has been filled with such [memory] recoveries, jarred by a photo, a friend’s story, a quiet moment of reflection—each building a fuller picture of my father.”
The personal photographs sprinkled throughout the book really enriched the story and brought an additional level of intimacy between author Mary Clark and her father, Charlie Walker, but they also help bond author and reader and reader to Charlie.  The inclusion of the photos makes us feel like we are discovering things about Charlie right alongside Mary. I found that their stories evoked foggy memories of my own of stories told and nearly forgotten within my own family. I made notes about things to ask my own dad.
“Each revelation brought Dad’s past into my present world, erasing years of silence.”
It’s always startling when you finally realize that your parents were (or are) something other than parents -- that they were important to all kinds of people who were never even on your radar.  As Mary reads letters and talks to extended family, she discovers her dad was the favorite uncle, the popular instructor, the faithful pen pal, and so much more. There’s a thread of regret that weaves through the book because Mary didn’t truly recognize or acknowledge her father’s greatness. She was proud, but not proud enough. In hindsight, she acknowledges she thought and acted like the sixteen-year-old she was, and then as the young woman finding her way, and then as the adult overloaded with responsibilities that overshadowed the past -- but it’s almost as if she still can’t forgive herself for any of it.
“A plane went down for every two hundred trips over the mountains. For every thousand tons flown into China, three Americans gave their lives.”
Learning about the Flying the Hump, the airlift operation that took supplies (primarily gasoline) from India to western China by flying over the Himalayas, was a new-to-me piece of World War II information. I not only hadn’t heard of these daring and dangerous transport missions, but I had only the slightest knowledge of the uneasy alliances made for it to happen.  While I am sure there are detailed accounts in military histories, the real stories of the men in the air are likely stored only in memories and stories passed down through generations.  Mary’s deeper understanding of the role her father played in the war is a treasure; her sharing the treasure with readers is priceless.
The story builds to what seems to be the natural culmination: Clark’s actual travels to India and China to walk her father’s path. Again, the photos are a real enhancement as she recounts her encounters with the people and places (Happy Jack is a highlight), noting the differences in how the two countries received Clark and her brother as children of a Hump pilot. Learning about how the city of Kunming, China, honors and acknowledges the importance of the Hump operation and the Allied role in helping China during the war was another reminder of how much I don’t know about history – or the world, for that matter.
Where the digital reader may feel that the resolution is near at this point, my print copy showed a quarter inch of pages left and that the story wasn’t finished. Clark adds a “but wait, there’s more” move and goes into how coming home from her trip was not the end of the story. She details additional stories that unfolded and connections she made as a result of her research and the Hump connection, all underscoring that her journey to truly know her father continues.
With the numerous photos, the short chapters, and lots of white space, Landing in My Present is a quick but fully satisfying reading experience. Clark’s writing is clean and effective in not only informing readers but forcing them to reflect and possibly experience a lump in the throat or tear in the eye. 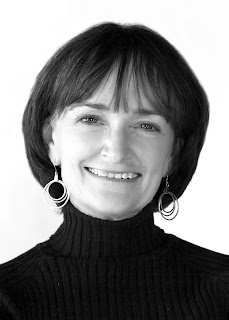 Mary Walker Clark is a retired attorney turned travel writer who loves taking readers with her to worldwide destinations. She has been traveling independently and internationally for over fifty years. Her essays may be found in the Paris News, at her blog, "Mary Clark, Traveler," and her podcasts at KETR 88.9, an NPR affiliate. Clark is an award-winning member of the North American Travel Journalists Association and a contributor to Still Me, … After All These Years, 24 Writers Reflect on Aging.

In 2016, Clark traveled to India and China to follow her father's WWII footsteps when he was a Hump pilot flying over the Himalayas. Her journey to connect with him fifty years after his death is told in her book, Landing in My Present.


Clark is a fifth generation Texan living in Paris, Texas. 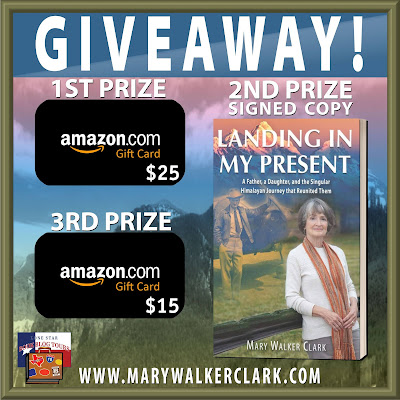 CLICK TO VISIT THE LONE STAR LITERARY LIFE TOUR PAGE
FOR DIRECT LINKS TO EACH POST ON THIS TOUR, UPDATED DAILY.
Or, visit the blogs directly: