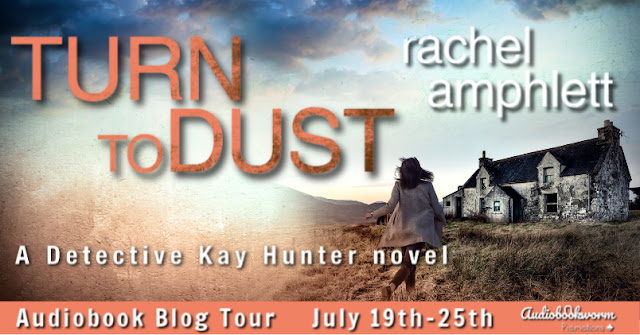 When the body of a naked man is found in the middle of a barren field, a rural community is left in shock - and fear.

Discovering that someone is offering money in return for information about the dead man and anyone connected to him, Detective Kay Hunter realises there is a dark side to the victim’s past.

When a key witness disappears and a web of deceit and lies threatens to derail the investigation, she fears the worst.

Can Kay and her team of detectives find out who is behind the man’s murder before another victim is targeted?

HALL WAYS REVIEW: AUDIO BOOK REVIEW. Reading (with my ears) the latest book in the Detective Kay Hunter series was the perfect escape during these social distancing days. It felt like spending time with old friends after a long time apart from them – I read the prior book, Cradle to Grave, nearly nine months ago! The fabulous Alison Campbell returns to narrate the story, and within four minutes, author Rachel Amphlett gives us the first mention of steaming hot coffee. Perfection.

Amphlett has a predictable formula that’s held for all nine of the books so far in this series – and that’s why I keep returning. I know exactly what to expect: a hideous death that turns out to be a murder; an investigation that uncovers nefarious goings-on, a late-in-the game discovery where the clock is ticking, and lives are on the line. The stories are police procedural, with the same core team working the crime and crime scenes, and main character Kay’s husband can be counted on to be her rock and our source of amusement. Sound dull? No way. Amphlett fleshes out these bones to provide readers a unique, gruesome, and engrossing story every. single. time. I almost always listen straight through in a day – do-able since most books come in at around 8 hours.

“Hunger beats solidarity most of the time, in my experience.”

In Turn to Dust, Amphlett masterfully builds a story around the victim and masterfully manipulates readers into making (incorrect) assumptions and drawing (wrong) conclusions about him. Predictably, the murder barely scratches the surface of a bigger sinister picture in Amphlett’s stories, bringing in a human-interest element that reminds readers to look beyond appearances and not to judge. I am being intentionally vague because to be specific would spoil the fun of discovering and uncovering the truth, right alongside Kay and her investigative team.

Did I mention gruesome? I do believe Turn to Dust has the most bizarre murder scene of the series thus far, and some really twisted (literally) things happen to victims. Amphlett’s descriptions are rich and detailed enough that readers’ noses will be wrinkling and stomachs clenching. This, in contrast to the ever-polite and proper manner of the British detectives, is one of the things I love. (Side note: I always learn new Brit-speak, and in this book, I learned the term “sleeping rough,” for how the homeless spend the night. Accurate.)

“She was partially thankful that the sign had been turned in the window to read “closed.” Otherwise she would have been tempted to browse the shelves. Adam…would have a heart attack if she bought more books.”

I also love the core characters, especially in off-duty mode. I love Kay and her love of wine, books, and bookshops; I love Barnes’s humor, even (especially?) when it comes out at inappropriate times; I love Adam and his rotating animal menagerie; I love Carris’s loyalty and empathy. Amphlett shows the human side of the detectives and peeks into their lives outside working the cases. There was less of the characters’ private worlds in Turn to Dust, and I particularly missed not having more Adam/Kay time. Strangely, Kay’s extended family is completely absent in this installment, unless I missed any mentions since I was reading with my ears.

Regardless, I’ll be back for the next installment in the Detective Kay Hunter series – and there just must be one. I’m not anywhere near ready to say goodbye. And Kay would never stop at a ninth story. A nice round dozen, I’d think, is more her style.

ABOUT THE NARRATION: Alison Campbell provides an outstanding performance, as always. Campbell’s pacing is even, her diction perfectly clear. I listened at regular speed for once, though Authors Direct, the platform I used, allows small incremental tweaks to the speed. Nice. Still waiting for the return of her creepy-guy voice, but she had lots of practice with weepy women in this one.

Thank you to the author and Audiobookworm Productions for providing an audio code in exchange for my honest review – the only kind I give. Forgive any misspellings of character names – don’t know ‘em when I read with my ears.

I received this audio book as part of my participation in a blog tour with Audiobookworm Promotions. The tour is being sponsored by Rachel Amphlett. The gifting of this audio book did not affect my opinion of it.

Alison Campbell is an actress based in Bristol, U.K. She has lent her voice to 50+ audiobooks, cartoons, documentaries and dramas. She can be found treading the boards across the country, in everything from Shakespeare to hip hop kids adventures. On screen she has appeared in dramas and science documentaries, her most recent co star was a CGI elephant. She can also be found performing the Natural Theatre Company's award-winning surreal brand of interactive comedy around the globe.

CLICK FOR HALL WAYS BLOG'S REVIEWS
OF OTHER BOOKS
IN THE DETECTIVE KAY HUNTER SERIES!