ABOUT THE BOOK: In the mangroves of Belize, something ancient lies hidden beneath the roots. And when it surfaces, so too will one of man's baser inclinations. The root of all evil: GREED.

Boone Fischer and Emily Durand have enjoyed months of quiet on the tiny island of Caye Caulker. After surviving Hurricane Irma and a mountaintop madman, the two divemasters have finally begun to relax. Big mistake.

Following on the fins of the best-selling thrillers Deep Shadow and Deep Cut, this third Caribbean action adventure in The Deep Series takes the reader on a whirlwind tour of Belize. From the offshore cayes to distant lagoons, from tropical rivers to jungle ruins lost in time, Boone and Emily race to untangle themselves from a deadly plot that threatens to shatter their lives.

HALL WAYS REVIEW: AUDIO BOOK REVIEW: Nick Sullivan's Caribbean Dive Adventures just keep getting better -- this is the third book (Book 1, Deep Shadow & Book 2, Deep Cut ) and it's best yet in both plot and narration. I cannot wait to dive into the next book (see what I did there?). The serenity and beauty of the island setting juxtaposed with the dark goings-on underwater and in the criminal underworld make for an action-packed, high interest story you'll read straight through.

Sullivan masters the world building – the paradise setting of Belize and its sparkling waters draws in readers, but something sinister is lurking beneath the surface, and readers can’t help but stick around to find out exactly what it is.

DEEP ROOTS is packed with quirky characters that readers will love and villains that readers will loathe.  The relationship between main characters Emily and Boone continues to gel, and I appreciate that Sullivan shows how it's truly a partnership. The author portrays a healthy relationship and the importance of communication, particularly for this couple who has been through some pretty harrowing experiences and both suffer a bit of PTSD. Best part for this reader? Though this relationship is central to the story, and though there's a very HEA, the focus of the story is the action, adventure, and suspense -- not the romance. Hooray!

The author is again the narrator of the audio book of DEEP ROOTS, and he perfectly voices the characters. There is never any confusion about who is talking (again, kudos to the writing), and he does some great island accents and in this story, he has gotten Emily's voice just right. The dueling accents of Emily (London) and Boone (American) was really fun and I enjoyed the "pronunciation denunciation."

I was thrown by some unexpected and unnecessary F-bombs, which are always more startling to hear than read, but overall, this is a well-written, well-voiced story start to finish. Readers can jump in on this series at any point, but as is the case with most series books, it's always the best experience when you can start at the beginning to get the backstory and watch characters (and author skills) grow.

Highly recommend the book and the series, and I'm ready to start book four,  DEEP DEVIL. Happily, it’s already out in the world, and if I play my cards right, I might finish it just in time for the fifth book. (Because the series MUST go on!)

Thank you to the author for providing me an audio download in exchange for my honest opinion -- the only kind I give. 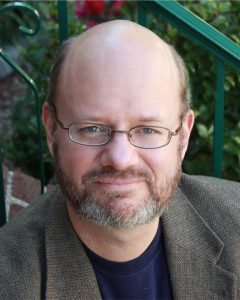 ABOUT THE AUTHOR: Born in East Tennessee, NICK SULLIVAN has spent most of his adult life as an actor in New York City, working in theater, television, film, and audio books. After narrating hundreds of books over the last twenty years, he decided to write his own. Nick has been an avid scuba diver for many years and his travels to numerous Caribbean islands have inspired this series. His first novel, Zombie Bigfoot, hit #1 in Horror Comedy on Amazon.

NICK SULLIVAN has been narrating audio books for over twenty years, recording over four hundred titles and receiving numerous AudioFile Earphones and Audie nominations and awards. He has worked extensively on Broadway and at many U.S. theaters. His TV credits include The Good Wife, The Affair, Divorce, Younger, Bull, Madam Secretary, Boardwalk Empire, 30 Rock, Elementary, and all three Law and Order series. Film credits include Our Idiot Brother and Private Life. Proud member of SAG-AFTRA

RELATED:
Posted by Kristine at 2:00 AM