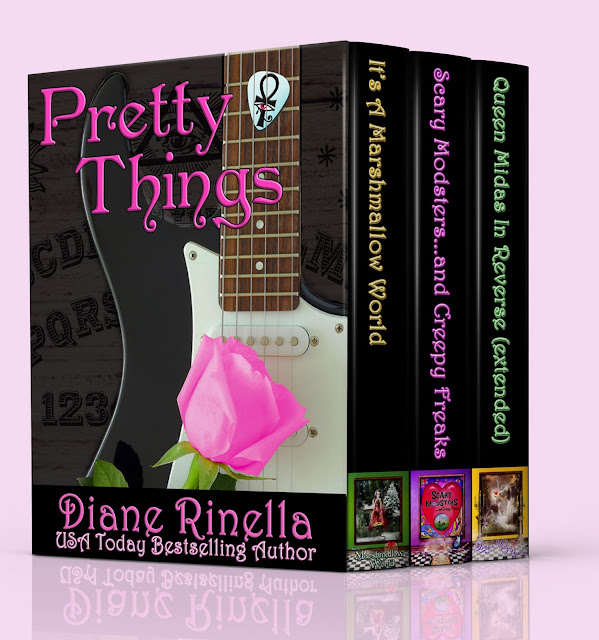 It's A Marshmallow World (novella)

Once upon a time, Darla was given a mystical gift, along with an ominous message. Now, meeting Chris puts her head in a spin. Could it be that gift from long ago holds the key to their happiness?


A fantastical romance involving a woman, the music that fuels her, and her Ouija board.

Rosalyn seeks acceptance, but is always ridiculed for her eclectic wardrobe and unconventional music collection. One fateful night, Rosalyn bewitches Niles, a stylish man whose quirky character is the perfect complement to her own. Unfortunately, Niles has a secret flaw that always ensures relationship suicide--and he can't hide it much longer.

During a tango with a Ouija board, Rosalyn summons the ghost of Rock and Roll deity Peter Lane. Peter entices Niles with the key to saving his relationship with Rosalyn. When Niles hears the price is avenging Peter's murder, how far will he go to secure Rosalyn's heart?

For Jacqueline, a second date is as rare as a unicorn. She's beautiful. She's intelligent. So why is she experiencing a string of first dates that leaves her ducking behind bushes and running for buses? Contrary to her nature, trading in her heels and curling iron for an easy chair surrounded by cats sounds appealing. Is she cursed, or can she find the man who will steal her heart?


The Rock and Roll Fantasy Collection takes place in a mystical world where rock and roll will save your soul.Although the books can be read in any order, the collection begins with It's A Marshmallow World before moving on to Scary Modsters ... and Creepy Freaks, Queen Midas In Reverse (all found here in Pretty Things), and then Voices Carry and Moonlight Serenade (both also found in the special set Forever Changes).

HALL WAYS AUDIO BOOK REVIEW: What I loved about these three stories is that despite all the goings-on with grandma, ghosts, and guys, there is a common thread of the power of having never-fail girlfriends. In each of the three stories, the main character goes through something (or a number of somethings) major. But through the highs and lows of life, Darla, Rosalyn, and Jacqueline always come together to share the laughter and tears -- and often a few beers at their favorite local bar, Mulligans. I love what these ladies share.
It's A Marshmallow World is cute, clean, and only mildly paranormal. I mean, it just seems natural for Darla to have the Gran-Gran connection even after she's gone. Who hasn't wished for that or even maybe felt it? One of my favorite lines:
"I marvel at the gift I've been given: the gift of helping someone else find his way."
Scary Modsters and Creepy Freaks has such an interesting premise in a person being able to only allow part of himself to be reincarnated and retain the rest in the after world. The parallel stories unfold and then weave together, with an excellent ending. Rosalyn, Peter, and Niles all are quirky and memorable -- and surprising. One of my favorite lines:
"Remember the simple joys adults so easily ignore."
Queen Midas in Reverse has readers cringing and shaking their heads in disbelief at the horrible dates poor Jacqueline endures. What is impressive is that Jacqueline -- with the support of her BFFs, of course -- manages to keep the faith.  Two of my favorite lines:
"Every woman should admit what she truly knows
about herself -- the good and the bad."
"Books help me live another person's dream."
Narrator Hollie Jackson did a great job of taking on a number of different characters and managed to keep their voices distinct from each other. There were a few times when Peter's British accent slipped into something else, but Jackson's delivery was fairly consistent.  The audio book runs just over 12 hours, but I listened at 1.25x speed and it didn't compromise the narration and shaved off a bit of run-time. I had worried that without a major road trip on the calendar, I wouldn't have time to listen to the book. My worries were unfounded; I didn't have to find time because I made time to listen!
Of course, since I read this book with my ears, the Grammar Policewoman in me was mostly off duty. My ear did catch several times when "and I" was used when it should have been "and me," but that's a pet peeve and most wouldn't notice or care when listening to a book. For the most part, the stories flowed and the dialogue was natural, with one exception -- Chris's lines in It's a Marshmallow World often felt overly scripted. However, Chris is so dreamy that again, I don't know if anyone will care.

Rinella's characters are realistic, robust, and ridiculously fun.  Listening to these stories was time well-spent. 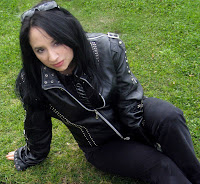 Enjoying San Francisco as a backdrop, the ghosts in USA Today Bestselling Author Diane Rinella's one hundred and fifty-year old Victorian home augment the chorus in her head. With insomnia as their catalyst, these voices have become multifarious characters that haunt her well into the sun's crowning hours, refusing to let go until they have manipulated her into succumbing to their whims. Her experiences as an actress, business owner, artisan cake designer, software project manager, Internet radio disc jockey, vintage rock 'n' roll journalist/fan girl, and lover of dark and quirky personalities influence her idiosyncratic writing.