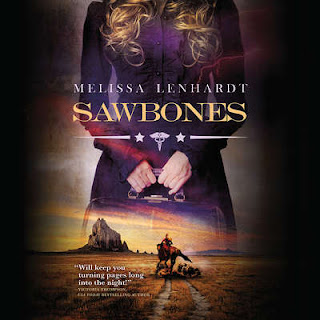 Blurb (Amazon): Wrongfully accused of murder, Dr. Catherine Bennett is destined to hang...unless she can disappear.

With the untamed territory of Colorado as her most likely refuge, she packs her physician's kit and heads west. But even with a new life and name, a female doctor with a bounty on her head can hide for only so long.
Sawbones is the first novel in a gripping historical fiction series.

HALL WAYS AUDIO BOOK REVIEW:
OH MY GOSH.  I read this book a year ago and was blown away by it (Read my review.).  The story, the writing, and the characters are spectacular.  When I won a copy of the audio book (of course I entered that giveaway!), I started listening the same day and finished all twelve hours of it the next.  Even fully knowing the story, I was drawn in by the outstanding narration of Suehyla El-Attar. I can't believe how many different voices she managed -- and managed very well. She nailed everything from Irish brogue to Texas drawl, young and old, male and female. I am beyond impressed.

As I warned in my original eBook review, there is graphic violence, including the Warren Wagon Train Massacre and rape. Reading it was tough, but El-Attar's voicing it was even harder.  This book is not for the faint of heart.

I anxiously await the next book Blood Oath, coming out May 23, 2017, and Badlands, coming out in June 2017, both with El-Attar again narrating. After listening to Sawbones, I am sorely tempted to just read them both with my ears. (We'll have both of them on Lone Star Book Blog Tour, too!)


Thanks to author Melissa Lenhardt for hosting the awesome giveaway of a free audio download. I won my copy with no strings attached, but I am so giddy, I just had to share my thoughts.

I got my copy from DOWNPOUR, but it's also available on AMAZON and I'm sure other fine retailers.

Melissa Lenhardt writes mystery, historical fiction, and women’s fiction. Her short fiction has appeared in Heater Mystery Magazine, The Western Online, and Christmas Nookies, a holiday romance anthology. Her debut novel, Stillwater, was a finalist for the 2014 Whidbey Writers’ MFA Alumni Emerging Writers Contest. She is a member of the DFW Writers’ Workshop and vice president of the Sisters in Crime North Dallas Chapter. Melissa lives in Texas with her husband and two sons.