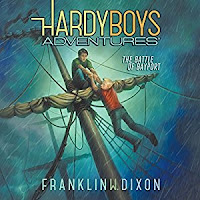 Blurb: Mr. Lakin made his way over to Don Sterling. "It's bad enough we have to suffer through your performances onstage. Now come on, we're going to be late for our own party. The whole world doesn't stop for you, you know."


Mr. Lakin gave the Don's boot a kick. The Don didn't move. Joe and I exchanged glances. Something was definitely not right. Joe knelt down and put his fingers on Don Sterling's neck like we'd been taught in our first aid course.
"I don't think he's acting," Joe said after a moment. "It's hard to fake not having a pulse."

◾◾◾◾◾◾◾◾◾◾◾◾◾◾◾◾◾◾◾◾◾◾◾◾◾◾◾◾
HALL WAYS REVIEW: How could I not love a Hardy Boys mystery? This was so much fun to listen to (and yes, I was "seeing" Shawn Cassidy and Parker Stevenson as the faces of Joe and Frank. Dating myself, again.) and it had been modernized to be a contemporary story. The story was well-done -- plenty of angles, plenty of suspects, plenty of motives. And surprise -- a murder!

What's great about the The Battle of Bayport is that there are so many elements for readers to enjoy while also learning a thing or two along the way.  The murder is handled just fine for intended audience, and it works because it is part of life in the world we live in.  As there was no one author (Franklin Dixon was a pseudonym for the over twenty different writers who have written Hardy Boys stories.), it allows the stories to evolve with the times. Real-life issues like debt, health problems, job loss, PTSD, and stress are all incorporated, but more as an awareness than the focus. There were several times, as a parent, I thought, "Uh-oh." Kids shooting real muskets in a reenactment? No way. But, in this story, the author was very careful to include subtle "there's a right way/wrong way" messages that made the characters' actions believable. My only complaints are that the things the boys do in the name of investigation could have some really dire consequences in the real world, and they are luckier than most in how things turn-out. Hopefully readers won't try to model those particular aspects of our main characters' personalities.

The audio book was just three and a half hours long, which was perfect for an audio book story for this age group. The narrator, Tim Gregory, did a great job of differentiating the voices of the boys and all the other characters. I especially liked the Chief of Police! Gruff! He did sometimes channel the sound of those old Smucker's commercials with Frank's voice, so that made him seem old at times. (The weirdest stuff jumps in my head at times.) Gregory also managed to convey the right level of emotion for each of the characters' states, whether it was guilty, panicked, excited, or scared.

Adults are portrayed realistically, warts and all, though the boys' parents aren't even referenced and beloved Aunt Trudy (not Gertrude any more) is a presence as a source of delicious food only and has no dialogue. (The original written stories had the boys living with their parents, and the TV version had them living with their widowed father.)

In The Battle of Bayport, readers can look forward to a great story within a familiar, contemporary world that shows the good and not-so-good of human nature. I highly recommend this audio book.

Thank you to Oasis Audio for providing me a CD at the 2017 Texas Library Association annual conference. No strings attached, but I am providing my honest opinion all the same. It's what I do.