TO MARRY A
TEXAS OUTLAW
Men of Legend, Book 3
by
LINDA BRODAY 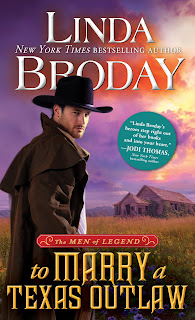 Hunted by lawmen, those seeking the bounty, and other outlaws hoping to become famous for killing him, Luke Weston survives by little more than his wits. He expects the bullet that will end his life to come any day. He’s cheated death too often.

Over the last two years, Luke has been working to right his wrongs and claim his birthright. Only one thing stands in the way of atonement—the murder of a federal judge. Only he didn’t do that. Armed with nothing more than the alias Ned Sweeney, Luke searches for the man who framed him. He’s only an hour away from catching him when he spies a woman bound and gagged in the middle of the prairie.

She looks dead but her eyes fly open at the sound of his footsteps. Worse, he discovers she has amnesia. He can’t just leave her so he tamps down his frustration over missing Sweeney again and loads her into a nearby wagon that bears all the markings of his family’s ranch.

In the weeks of trying to help the woman he calls Rose learn her identity, Luke finds himself falling in love with her. She’s sweet and funny and makes him dream of impossible things. Then they meet a boy and learn her name is Josie.
As her lost memories tumble back, Luke faces his greatest fear. Can he make Josie his wife before he loses everything?
CLICK TO PURCHASE
Amazon │ Barnes & Noble │ iBOOKS │ Kobo 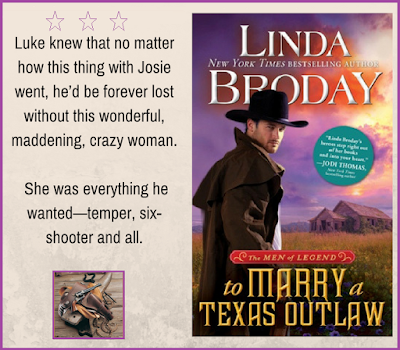 Praise for To Marry a Texas Outlaw:
“A gunslinger who’s better than he thinks he is; a lovely amnesiac; a young, wannabe gunslinger; an abused boy; a scruffy dog; and a sadistic killer make the third book in Broday’s outstanding family saga an unforgettable journey through the Old West.” -- Booklist Starred Review

“This is one author that knows how to tie you in knots keeping you on the edge and making your smile through it all. She gives you death and heartbreak as the west is known for with plot that pulls you in. I couldn’t put this down and had to know what was going to happen next.” -- Cyn’s Reviews

“Broday’s gritty depiction of the Texas frontier will strike a chord in the hearts of fans who long for proud, rugged cowboys and strong-willed women.” -- Romantic Times 4 Stars

“Whew! What a story! Good thing Linda Broday didn't struggle to find words for her story the same way I'm attempting to find words to express just how much I love not only this book, but this entire series as a whole. To Marry a Texas Outlaw is a thrilling conclusion to a delightful and much-loved story of the Legend family that delivered so many emotions.” – Michelle, Goodreads Reviewer


“There is one guarantee, with a Linda Broday book, you're going to experience a true heartwarming-Broday story with so much action that it's impossible to put down. With her books you are always in for the ride of your life.” -- Tonya Lucas, Goodreads Reviewer 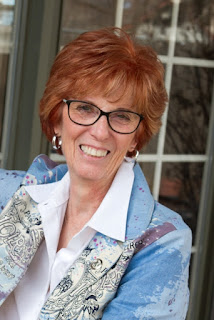 Linda Broday
Historical Western Romance Author
I'm a New York Times and USA Today bestselling author of 8 full length historical western romance novels, with another set to release 2017, and 10 short stories. Watching TV westerns during my youth fed my love of cowboys and the old West and they still do. I reside in the Texas Panhandle on land the American Indian and Comancheros once roamed. At times, I can feel their ghosts lurking around every corner. Texas’ rich history is one reason I set all my stories here. I love research and looking for little known tidbits to add realism to my stories. When I’m not writing, I collect old coins and I confess to being a rock hound. I’ve been accused (and quite unfairly I might add) of making a nuisance of myself at museums, libraries, and historical places. I’m also a movie buff and love sitting in a dark theater, watching the magic on the screen. As long as I’m confessing…chocolate is my best friend. It just soothes my soul. 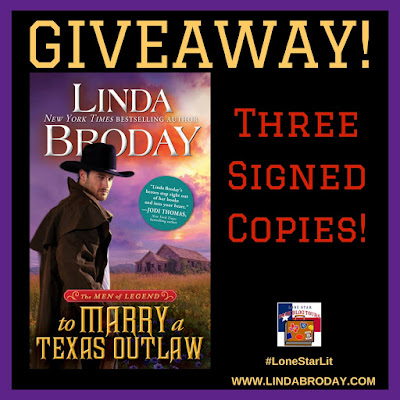