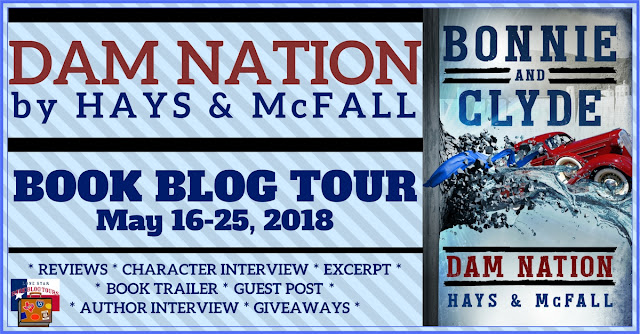 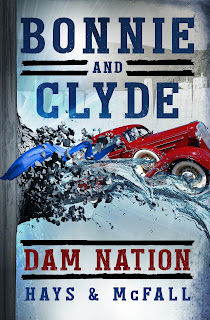 
The year is 1935 and the Great Depression has America in a death grip of poverty, unemployment and starvation. But the New Deal is rekindling hope, with federally funded infrastructure projects, like Hoover Dam, putting people back to work.  Set to harness the mighty Colorado River for electricity and irrigation, the dam is an engineering marvel and symbol of American can-do spirit.

So, why is someone trying to blow it up?


When an informant on the construction site is murdered, Bonnie and Clyde—spared from their gruesome deaths and forced into a covert life working for the government—are given their second assignment: stop the bomb and protect the thousands of laborers and families in the company town. It's their most dangerous mission yet: working for a living.

Can the notorious lovers put aside their criminal ways long enough to find out who wants to extinguish the American dream, and hopefully reclaim a shred of redemption along the way?

The thrilling story cuts back and forth between the modern era where a reporter interviews the now-elderly Bonnie Parker, and the dangerous 1930s undercover exploits of Bonnie and Clyde, as they are thrust into a fight to defend the working class against corporate greed. 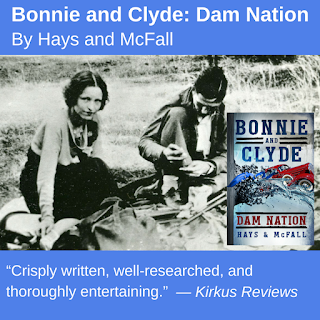 PRAISE FOR BONNIE AND CLYDE: DAM NATION:
Crisply written, well-researched, thoroughly entertaining. As in Resurrection Road, Hays and McFall evoke time and place well in this sequel. The story’s politics are fresh and timely. Readers will find Bonnie and Clyde to be great company, and the novel’s framing story (the widowed Bonnie’s 1984 recollections) gives their relationship an extra layer of poignancy.
-- Kirkus Reviews

“Dam Nation” highlights the real-life turmoil of the 1930s as only Hays and McFall can — shadowy intrigue, plenty of suspects and enough behind-the-scenes and under-the-covers action to keep the narrative sizzling along to the final page.
-- East Oregonian

A rollicking good read. The real history of the rise of unions and worker rights against the backdrop of a nation recovering from the Great Depression contributes an engrossing, realistic scenario; a vivid read that blends fiction with nonfiction elements in a way that makes the book hard to put down.
-- Midwest Book Review

CHECK OUT THE TRAILER FOR RESURRECTION ROAD, BOOK ONE IN THE BONNIE AND CLYDE SERIES:

HALL WAYS REVIEW: When I read and am WOW’d by a first book in a series, I am always nervous about the second book. What if that first one was just a fluke and the next one is a fail? What if the author(s) take it in a different direction? What if I am disappointed? And for a series that’s all about WHAT IF, waiting for the publication of Bonnie and Clyde: Dam Nation, the anxiety level was even higher. I guess I have book series trust issues. In my gut, I knew that in Dam Nation, good ol’ Bonnie and Clyde would kick ass and take names, but the brain kept whispering WHAT IF they don’t?

"You don't use good dogs to guard the junkyard; you use the
meanest g****n dogs you can get a collar around."

I am happy to report that the gut was correct, and my trust issues were terribly misplaced. Dam Nation is a full throttle thrill ride. Seriously, I am worn out by the action and like “Brenda and Clarence” (as they are renamed), after this adventure around the building and saving of Hoover Dam, I need to go collapse on a Mexican beach for a while, adult beverage in hand.  Authors Clark Hays and Kathleen McFall continue the story of Bonnie and Clyde, who are very much alive and very much owned by a secret government operation.

As in book one, Resurrection Road, there are dual story lines going on in Dam Nation. One is set in 1984, with a Lubbock journalist helping an aged Bonnie investigate loose ends and record the real story of Bonnie’s and Clyde’s lives after their supposed demise in 1934, at the ambush in Louisiana. A (mostly) reformed Bonnie wants to make amends for past wrongs done by her and to her, and she’s chosen Royce to make that happen. Readers will enjoy seeing that the spunk and spark in eighty-year-old Bonnie is much the same as the version of her fifty years earlier.

"Everyone has a purpose in life,
and perhaps they are fulfilling theirs."

The second story line is the beefier of the two, with Bonnie/Brenda and Clyde/Clarence sent on assignment to learn who is sabotaging the building of Hoover Dam. Is it the union? The mob? Italian anarchists? Of course, nothing is as straightforward as it should be, and the story progresses with B & C turning into working jerks who must put in a full day to make their living. The scenes of the two of them dealing with being nine-to-fivers were some of the most humorous (I hear ya, Clyde, on waking up too early and to an alarm every day; and I hear you, Bonnie, on not taking on the domestic goddess role. Groceries are overrated.). The couple is still as sexually charged as ever, and they are fiercely loyal to and protective of each other. There is a unique dynamic to their relationship not only because of all they’ve been through together, but because of a mutual respect for each other’s strengths and weaknesses.  Readers can’t help but love this couple and will be reconciling their current and former personae, seeking to forgive them as Bonnie and Clyde do the same of themselves. They continue to be works in progress, and that’s one of the best hooks in the series.

In Dam Nation, the scenes are more realistic, and readers don’t have to suspend their disbelief or stretch to accept the action. Bonnie and Clyde are good at being bad, and they have skills beyond the average person, but they aren’t over the top, and that’s a good shift in this book.

The writing in Dam Nation is excellent, with the dialogue being especially good. Due to the word choices and sentence structures, writers will really hear Clyde's voice.  Hays and McFall incorporate interesting facts of the times (like the expense of the twenty-five-cent movie) and factoids on the size and scope of the Boulder (Hoover) Dam program, but it’s organically done and never feels like an info-dump. There were some references (like my fave girl, Nancy Drew) that will surprise readers who may not realize how long those things have been around. The book is well-researched, and as with Resurrection Road, it draws parallels and highlights the flaws in the political system that persist into current times. Except for some typos and run-ons (that won’t likely distract anyone from the fabulous story), it was cleanly edited. (For those who care [who, me?], in true journalistic form, the Oxford Comma, sadly, is missing.)

As Bonnie and Clyde might say, Dam Nation was a fun kick in the pants, and I highly recommend it. I know I am going to suffer the consequences of reading it straight through and seeing the sun rise as I finished, but really, isn’t that how the best books work? The hangover is well worth it. Based on that ending, I had better rest-up because it feels like a next installment is coming. Better be!

Thank you to Lone Star Book Blog Tours and the authors for providing me a gorgeous (this COVER) print copy in exchange for my honest opinion – the only kind I give. 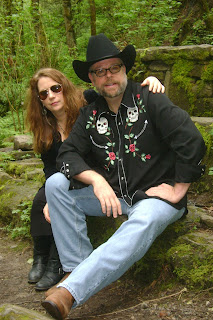 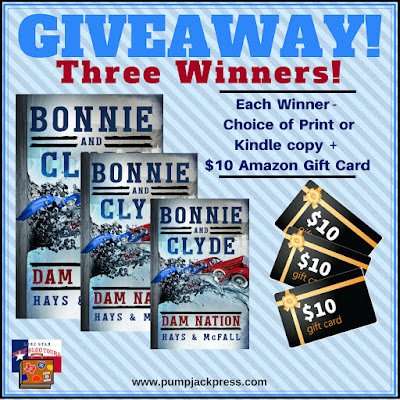