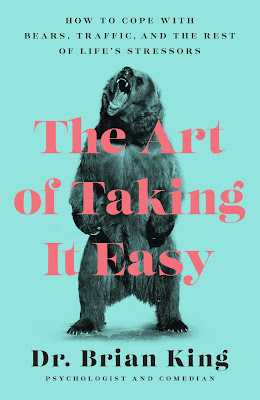 THE ART OF TAKING IT EASY
by Dr. Brian King

The author uses a bevy of running jokes and punch lines to enliven technical explanations for how and why people experience stress. His metaphors of coming across a bear in the wild as well as being stuck in traffic are also used to great effect to explain a variety of stress responses, such as perceiving a threat and feelings of powerlessness.

Reframing thoughts plays a large role in King's advice: stress is simply a reaction to a perception of threat being able to consciously redirect choices made by other areas of the brain is the key to living a less stressful existence. He also provides breathing exercises, plants for painting physical health, and useful advice for setting attainable goals. King's enjoyable guide to living with less will be of help to any anxious reader.

BUY THE BOOK ON AMAZON

=  =  =  =  =  =
EXCERPT
=  =  =  =  =  =
What Happens To Our Bodies During Stress
from The Art of Taking It Easy: How To Cope With Bears,
Traffic, And The Rest Of Life’s Stressors
by Dr. Brian King
Most people are familiar with the standard “Fight or Flight” dichotomy, and really that is probably all we need to understand, but I like to throw in “Freeze” because it is a common behavioral reaction. Think about how many times you may have been so overwhelmed with stress that you became incredibly inactive. Maybe you were sitting at your desk at work, handed an incredibly daunting task with an unrealistic deadline, and instead of diving right in and tackling that bad boy (fight), or asking your boss for an extensions or help (flight), you just sat there unable to do anything (freeze). I’ve been there. Remember the job that made my eye twitch?
It is easy to understand freezing in the bear attack scenario. A lot of people will freeze up when overcome with fear. Even the Black Panther froze (and his sister made fun of him for it) despite the fact that he has superpowers and advanced technology! Marvel movies aside, my favorite “freeze” story took place during my time in graduate school.
I had a friend who was given a car by her family. The problem was, it had a standard transmission and she didn’t know how to drive a stick. What a great gift! “Here: it’s a car that you can’t drive!” Being one of her few friends that knew how to drive one, I offered to teach her. We started off in the parking lot, I explained how the clutch pedal worked, when to press it down and how to shift gears. Then she practiced a bit. Of course there were some initial stalls, but after a few minutes she got the hang of it and was shifting all the way up to third. I asked if she was ready to hit the streets and she said yes. We left campus, drove a few blocks and everything seemed fine. We caught a red light, and she slowed down to a stop without incident. She was a little stressed, elevated heart rate and all, but not out of control.
We were at a four-way intersection, the first car in our lane at the light. As soon as the light turned green, she went to press the gas pedal but did something wrong and the car stalled. Now, in traffic we have cars coming at us from the opposite direction and cars coming up from behind and she freezes. In this context freezing meant letting go of the steering wheel, lifting her feet off the pedals and COVERING HER EYES! She yelled “I can’t take this” and threw her arm across her face.
Suddenly, I became stressed. My fight response kicked in and I grabbed the wheel from the passenger’s seat, stretched my leg over the center console to work the pedals and steered us out of traffic. Nobody was hurt and after we calmed down, we had a good laugh about the whole thing. You know, where we could have been seriously injured.
I didn’t realize it until much later that her reaction, which I had a hard time understanding at the time, was a common reaction to stress. Remember I discussed how the brain picks actions based on whichever one has the most potential value given our previous experiences. I believe that if neither option looks appealing, the brain will choose to freeze or do nothing. Like with the bear attack, successfully fighting off or running from a bear are extremely unlikely outcomes for most people. In the absence of a good option, many people choose to freeze. Similarly, at that moment sitting in the car in the middle of the intersection, my friend was faced with a choice to make. In a car, both fight and flight require driving skills, and to a brain that lacks confidence in its ability to drive neither option will likely hold much value... so she froze.
=  =  =  =  =  = 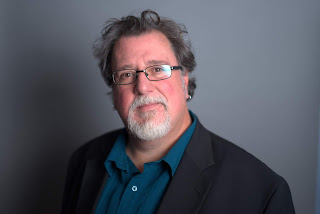 ABOUT THE AUTHOR: DR.BRIAN KING trained as a neuroscientist and psychologist and for the past decade has traveled the world as a comedian and public speaker. By day he conducts seminars, attended by thousands of people each year around the US and internationally, on positive psychology, the health benefits of humor, and stress management. By night he practices what he teaches in comedy clubs, and is the founder and producer of the highly reviewed Wharf Room comedy show in San Francisco.
Dr. Brian holds a bachelor’s degree from the University of Texas, a master’s degree from the University of New Orleans, and a PhD in neuroscience from Bowling Green State University. Hailing from New York and living in dozens of cities throughout the US as the child of a military family, today spends his life on the road with his partner, Sarah, and their young daughter.
Website ~ Twitter ~ Facebook ~ Instagram