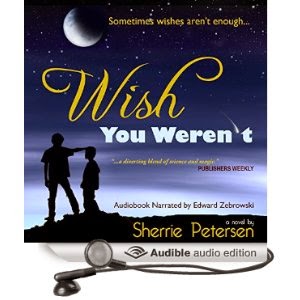 
If you have a sibling, you've done it. At some point or another, you've muttered that little wish that your brother or sister would just disappear. Maybe it was as your sibling was spying on you as your date brought you home, or maybe it was as you were trying to escape another torturous tickling, but you've done it. Wish You Weren't follows almost twelve-year-old Marten as he lives the consequences of his wish upon a shooting star coming true. With his best friend Paul, and the mysterious Tor, who comes from across the universe, Marten races against time -- past, present, and future -- to fix his wish. Sherrie Petersen provides a fun, sometimes funny, and thoughtful story about family, friends, gratitude, and what's really important in life.

At just a little over three hours, this audiobook was the perfect length to listen to in the car and will keep listeners engaged.  In Marten, Petersen perfectly captured the angst of being the older sibling who feels used by his parents. In this story, there were times when listeners will agree that perhaps just a little too much responsibility and expectations just a little too high were put upon poor Marten in taking care of little brother Aldrin. Best friend Paul provided some comic relief and unexpected insight, and best of all, he always had Marten's back. Narrator Edward Zebrowski does a fabulous job of voicing the different characters, which really added an element to the story.

CLICK HERE TO LISTEN TO THE FIRST 5 MINUTES OF THE AUDIOBOOK!

There were a few things that didn't work for me, particularly in how characters responded to certain situations, but honestly, I am not sure a younger reader will catch them or care about them because the premise and adventure are so cool.  I do have to mention that there was one part that was absolutely unrealistic: the family was lying in the grass in Texas. (Hahahahahaaaaa!That's a little joke for Texans who know that Texas grass has fire ants and/or chiggers, no matter how nice it looks. There is just no escaping them.) Aside from the absence of stinging ants, there were plenty of scientific facts and conjecture thrown in, and some very cool concepts and gadgets that will entertain and inform listeners.

I recommend this book in print or on audio, for kids ages 8-10. It's clean, adventurous, and even perilous at times and a great escape.  Thank you to the author for providing me an audiobook copy just 'cause I asked for it! In exchange, I am giving my honest review -- the only kind I give. 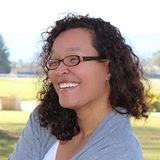