Kitty Hawk and the Curse of the Yukon Gold

Reading, I. (2012). Kitty Hawk and the Curse of the Yukon Gold (Book One of the Kitty Hawk Flying Detective Agency Series). Self-published.

MG* or YA / Adventure / Mystery / Historical

Blurb (from Goodreads): Kitty Hawk and the Curse of the Yukon Gold is the thrilling first installment in a new series of adventure mystery stories that are one part travel, one part history and five parts adventure. This first book of the Kitty Hawk Flying Detective Agency Series introduces Kitty Hawk, an intrepid teenage pilot with her own De Havilland Beaver seaplane and a nose for mystery and intrigue. A cross between Amelia Earhart, Nancy Drew and Pippi Longstocking, Kitty is a quirky young heroine with boundless curiosity and a knack for getting herself into all kinds of precarious situations.


After leaving her home in the western Canadian fishing village of Tofino to spend the summer in Alaska studying humpback whales Kitty finds herself caught up in an unforgettable adventure involving stolen gold, devious criminals, ghostly shipwrecks, and bone-chilling curses. Kitty's adventure begins with the lingering mystery of a sunken ship called the Clara Nevada and as the plot continues to unfold this spirited story will have armchair explorers and amateur detectives alike anxiously following every twist and turn as they are swept along through the history of the Klondike Gold Rush to a suspenseful final climatic chase across the rugged terrain of Canada's Yukon, the harsh land made famous in the stories and poems of such writers as Jack London, Robert Service and Pierre Berton. It is a riveting tale that brings to glorious life the landscape and history of Alaska's inside passage and Canada's Yukon, as Kitty is caught up in an epic mystery set against the backdrop of the scenery of the Klondike Gold Rush.


Kitty Hawk and the Curse of the Yukon Gold is a perfect book to fire the imagination of readers of all ages. Filled with fascinating and highly Google-able locations and history this book will inspire anyone to learn and experience more for themselves as Kitty prepares for her next adventure - flying around the world.


Hall Ways Review: Author Iain Reading has written a sweeping story that takes readers over land and sea as main character and young pilot Kitty Hawk discovers the world of whales and the often sordid history of the Gold Rush.  Reading's strength is in his descriptions of the landscapes that Kitty encounters where rich details make it easy for the reader to envision the settings.  Additionally, Reading has created an interesting, believable character in Kitty, who on the one hand shows maturity and responsibility well beyond her years, and on the other hand shows she is flighty (no pun intended), boy crazy, and one hundred percent teenage girl. Her inner monologue was spot-on and provided much needed humor and reminders that Kitty is only eighteen, despite what she's already doing with her life.  Readers, be prepared to learn a lot of facts about everything from history to topography to nature in all its wonder.  And if the facts included in the book aren't enough, the author provides a fabulous supplement of additional information and links for readers to further explore the topics in the book.


The real problem I had with the book was that it seemed like a late, but not final draft of the book.  For one, there is simply too much information presented, which makes it overwhelming and difficult for the reader to discern between what's important to the plot, and what's simply extra bonus but related information. Secondly, the font is small and the print is dense with very little white space on the page, which visually is a turn-off for many readers (especially reluctant readers). Most troubling -- especially in a book aimed at younger readers -- is the number of writing errors including: typos, missing and incorrect punctuation, dropped words, agreement errors, and numerous long, unpunctuated sentences.  As an example of the issues, the sizable paragraph from the Goodreads blurb (in bold above) is only three sentences long, is missing commas (thus creating run-on sentences), and uses the word "climatic" when the word "climactic" was intended. A thorough, professional edit is needed (book blurbs included) to eliminate the unnecessary, correct the mistakes, and bring focus to the main plot line. Incidentally, the main plot line of the Yukon gold mystery is actually quite engaging and the book becomes a real page turner -- once you get there.


Despite the need for editing, the bones of a great series are here. My hope is that since books two through five of this series are already published (with the promise of eight more books after that), the author has addressed these issues.  There definitely has been a shift in the cover art, and the books published after Curse of the Yukon Gold have a sleeker look, which is more in line with a young adult audience, though the intended reading audience is a little bit hard to pin down. With the main character fresh out of high school, it seems that age range would be the ideal reader, but the writing and Kitty herself seem more middle grade at times. The content is tame and possibly too slow moving for older young adults. At the same time, some of Kitty's actions are not just reckless but extremely dangerous (as in her ease and comfort with kidnappers, lack of communicating her plans, stunt flying, etc.) and perhaps not the best example for younger readers*.


Thank you to Book Publicity Services and the author for providing me a print copy in exchange for my honest opinion -- the only kind I give.


CHECK OUT THE SERIES TRAILER: 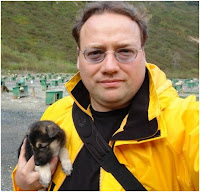