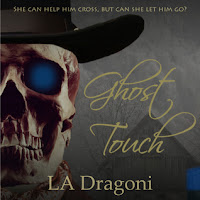 
Check out the new cover featured in the re-release tour!

BLURB (from website): She Can Help Him Cross, But Can She Let Him Go?


For fifteen minutes each night a portal opens in Tamara's barn and a horde of ghosts spills into her yard. She and Dex work together to find a way to help Cal and the thousands of spirits stuck in the void to cross over. When she learns she has the ghost touch—the ability to touch the ghosts as if they were corporeal—and she accidentally helps a little boy cross, she believes it might be possible. But not all the spirits play nice and when they learn they can sip energy from her ghost touch, they become greedy putting her life at risk.
Each time Cal has to pull her from the mass of ghosts, her touch restores him more and more until he is at danger of being stuck on earth—forever, which is very enticing to Tamara the better she knows him. Will she and Dex figure out how to help the spirits cross and if they do, will she be able to let Cal go?


Romance books just generally aren't my thing, but when I won a copy of this book and had the option to get it as an audio book, I grabbed it fast. I had an upcoming five hour-ish solo road trip, and this seemed like a great way to pass the driving time.  GREAT decision!  Author LA Dragoni weaves several interesting and unique premises about the afterlife into this story -- and the love triangle is only two parts living!  The story has eerie, vivid descriptions of the ghosts, and the emotional turmoil of all three of the main characters is very well defined.  Dragoni provides an awesome villain to hate and then masterfully manages to change the reader's opinion of the villain.  It is hard to believe that the main character, Tamara, is only nineteen and holding down a full time job and taking care of a house and ranch all by herself -- especially given it doesn't seem like Tamara was left any kind of inheritance when her mom passed away. The finances of that situation don't make sense, but readers will likely be willing to suspend their disbelief because the story is so enjoyable.

I am by no stretch an expert on love triangles in books, but the one in Ghost Touch definitely isn't standard.  Tamara falls in love with both Dex, a hunky flesh and blood man and Cal, a slightly mildewy smelling skeleton. Read the book and you'll see how this works! You'll love them both, too.  There are several twists and surprises in the plot, and the ending is satisfying but absolutely leaves questions that hopefully will be answered in a subsequent novel.

Though the book is marketed to adults, with a nineteen-year-old main character and a clean romance, I think high school aged readers and older would enjoy the story.  There is some passionate kissing and implied sex, but if there was any strong language, I don't recall it. Ghosts are ghastly but not disgusting -- enough to make an impression but not excessively described.

ABOUT the Audio Book: Narrator Darlene Allen does a good job voicing most of the characters, but the delivery was a little slow, and I had to increase the speed to 1.5x to listen comfortably. Dramatic moments tended to border on cheesy, but at the same time, Allen often nailed the teen angst. There were a few odd pronunciations, and Allen regularly inflected her voice so that statements sounded like questions, both things that were distracting for this listener.

I won this book from author Kai Strand in an #InkRipples giveaway on her blog. There were absolutely no strings attached, so this is a "just because" honest review -- the only kind I give.

Check out this Book Trailer! 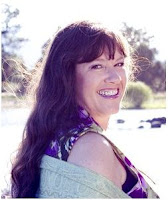 ABOUT THE AUTHOR: LA Dragoni isn't too particular about who falls in love or where they fall in love. She simply considers it her job to capture the story about their love. Whether it's paranormal, mythical, or time travel, LA will be there to divine their story for you. She lives in Central Oregon with her husband and children, but haunts ghost towns and cemeteries up and down the west, in search of the next adventure to sift through her storytelling brain. Connect with the author: