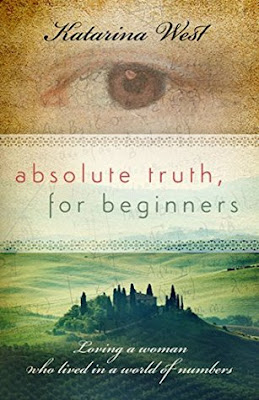 SCROLL DOWN FOR BOOK GIVEAWAY!
Book Blurb:
Elisa Mancini is a Nobody. Painfully insecure, more at ease with books than with people, at twenty-three she’s a university dropout living at her aunt’s, drifting from one day to another, and waiting for something big to happen.

Judith Shapiro is a Somebody. Arrogant and eccentric, she’s a superstar of mathematics, the subject of scientific articles, and the undisputed ruler of the world around her.

But loving Judith Shapiro is like running a marathon in a war zone. As days pass, Elisa’s wild infatuation takes on a suicidal bent, and the world around her starts to go to pieces. Just as everything is about to blow up, the moment of truth comes.

QUESTIONS FOR & ANSWERS FROM KATARINA!

Q1. In Witchcraft Couture the setting was a Chianti farmhouse. In Absolute Truth it's a sixteenth century villa. Was this intended? Could you set your novels somewhere else than rural Tuscany?

Moving into the countryside some eleven years ago was a big change for me, and it was reflected in my writing for a long time. It seemed as if the only place where my stories could take place is a farmhouse in Chianti, not unlike ours. I’m slowly breaking free from that, and in my next novel the setting is Florence. But I still find it hard to set my novels anywhere else than Tuscany. It’s a big inspiration for me – and Italy in general.

Q2. Absolute Truth is a coming-of-age story, as even the title indicates. What are the biggest truths Elisa learns during her tumultuous affair with Judith?

One, that she has her own voice, her opinions, and that’s just as good as anyone else’s. Two, that she shouldn’t go after what looks good on the surface, but rather what feels right inside. Three, that she should forgive herself and forgive others, and take life as it is. Four, that she is OK just the way she is. Five, that what matters is not the past, but the present. Six, that at some fundamental level, we’re all Nobodies, even presidents and prime ministers and Nobel prize winners. Seven, that there are people who love her. Eight, that she is a survivor. And nine: life is wonderful, full of miracles.

Q3. How would you define the relationship between Judith and Elisa?

I think it’s the last part that says something significant about Elisa’s mad infatuation with Judith Shapiro: her love for Judith is a strange form of… yes, submission even, and the more the affair goes on, the less Elisa can handle it. ‘My love for her is a peculiar form of dependency,’ Elisa says to herself, ‘and the feeling is so strong that I can’t control myself. What makes it so peculiar is the fact that however desperately I miss her in her absence, there are only a few moments when I actually enjoy her company. When we are together, I’m always nervous. I never relax. I’m afraid of saying something stupid, of speaking poor English, of not understanding her comments. Of disappointing her.’

Q4. There is a book inside a book in your novel, as Elisa finds a paperback called "Absolute Truth, For Beginners." What is this book, and who is its author? Do either really exist?

No, it doesn’t! John Heilbroner was an imaginary author who I simply willed to come to life. There are earlier manuscript versions where there are pages-long excerpts from his magnum opus. In the end, I eliminated them from the final version because they slowed the pace of the story. But maybe one day I’ll publish his version of Absolute Truth…

Q5. Time seems to be a recurrent theme in Absolute Truth. For example, Judith Shapiro's famous theory claims that time does not exist, and Elisa has nine pasts. Plus, the novel seems to be all about breaking free from the past and becoming who you really are. At its base, is this a novel about time?

Time was the reason why I became interested in Judith Shapiro in the first place. Because it was the theory of absolute time that existed first, not the characters.

Q6. And now, a personal question. After reading Witchcraft, as you know, I became a Super Fan and now follow you on social media. You post such glorious pictures and peeks into your beautiful world. I am in awe of how elegant and calm and put together you are -- what is your secret? (and confess -- do you have times when you don't wash your hair and sit in sweatpants all day?)

I have a terribly inelegant secret to share with you. It’s called… olive oil. Because living here in Chianti, we have some eighty olive trees, and so we make our own olive oil. Which is very high-quality – one hundred per cent organic olive oil, the kind of greenish-golden liquid that is just as costly as a bottle of good Chianti. And some time ago I learned that nothing is as nutritive to your hair than high-quality olive oil. Honestly, I mean it. (And I’m sorry Kristine, if I now transform your book blog into a beauty blog… But I must say this: ladies, go and get some good olive oil for your hair, because it works wonders!) OK, so far so good. But the problem is that olive oil is kind of… oily. And you have to keep it in your hair at least for an hour for it to have an effect. So after massaging my hair with olive oil, I put on a shower cap. And if it’s cold, on top of that I put my old, rainbow-coloured beret. And then I sit down writing, knowing that I look absolutely ridiculous. It’s not that I’m having a Bad Hair Day… It’s like I’m having a Weird Hair Day. There are legends about eccentric Chiantishire expats – you know, those starving old poets who live alone in isolated farmhouses with a regiment of cats and a rifle. Well, on my olive oil treatment days I look just like them… And worse still, once I sit down to write, I forget the passage of time. And maybe the local electrician is paying a visit in the afternoon, but I’m still wearing the shower cap. Because I forgot all about him. And now, there’s no time to wash my hair. So he looks at me, shaking his head. And I know what he thinks. Foreigner. That’s what his eyes say. You have to forgive her, because she’s a foreigner.

Q7. Another personal question: What is something fun or funny about you that most people don't know?

Many of my personal possessions have a name. They have a personality. I wouldn’t be surprised if they come alive at night, when we human beings are sleeping. My favourite coffee cup is called Gertrude, and my writing desk (the one that witnessed me writing Absolute Truth and Witchcraft Couture) is called Principessa, which is Italian for princess: that’s because it is a real Swedish Rococo table, and it was ridiculously expensive, at least for my budget. My old, ramshackle jeep is called Rocco, after Visconti’s film, and I’m sure that it is able to read and write, because it has never let me down, not even during the worst snowstorms. And my tractor (because obviously all novelists living in the country must have a tractor too!) is called Oscar. Just like the anti-hero of my debut novel. So you know, I’m never lonely. Even if I just stay home, writing…

Love it! Thank you, Katarina, for sharing your book and personal secrets! 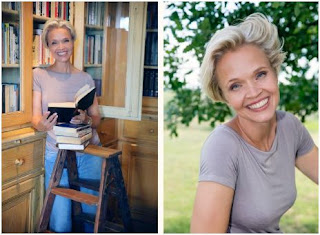 ABOUT THE AUTHOR: Katarina West is  the author of Witchcraft Couture, her debut novel. She was born in Helsinki, Finland, into a bilingual family that in addition to humans consisted of dogs, cats, horses, guinea pigs, canaries, rabbits and – thanks to her biology teacher mother – stuffed owls and squirrels.

She spent time travelling in Africa, Asia, and Latin America and went on to study at Queen Mary and Westfield College in London and the European University Institute in Florence, where she completed her PhD in political science and published a book, Agents of Altruism, based on it.  During those student years, she started work as a journalist and continued writing for various Finnish magazines and newspapers for over ten years, writing on various topics from current events and humanitarian issues to celebrity interviews and short stories.  She also briefly worked as a university lecturer on humanitarian issues in Northern Italy.

Katarina lives in an old farmhouse in Chianti with her husband and son and when not writing, she is fully immersed in Tuscan country life, from jam-making and olive-picking to tractor maintenance.

Katarina is giving away 10 Amazon eBook copies of Absolute Truth, For Beginners! Giveaway runs through 10PM CST, December 30th, and has one click entry! Easy!


Be sure and visit the other blog stops on this book tour:
6 December
Rocksprings Crafts

28 December
That’s What Sophie Did

29 December
My Bookshelf Is Yours