Love On the Slopes: Hartley Series #1


Jessa Hartley has big plans. She's been saving her pennies for the day when she can buy the beloved Jackson Hole Ski Lodge, where she's a ski instructor. She's made no secret of her dream to her family and friends, or to the owner of the lodge, so when she gets word that someone else is buying the lodge, she is livid. Things go from bad to worse when Jessa learns that the new owner will be Dominic DeRenzi, who broke Jessa's teenaged heart years ago, when he rejected her and moved away.

Dominic DeRenzi has turned into a powerful businessman in the years since he left Jackson Hole to learn his father's business in Italy. In buying the struggling Jackson Hole Ski Lodge, Dominic is prepared to sink lots of money into making the lodge profitable.  What he is not prepared for is seeing the now grown-up,  breathtakingly beautiful Jessa Hartley and having his long buried feelings for her come bubbling up to the surface again.

As both Jessa and Dominic fight their feelings for each other, the flames that were burning years ago seem to be burning brighter -- and hotter -- than ever.  With plenty of obstacles to keep them apart, will the fire be strong enough to burn down barriers, or will the fire destroy them both?
In Love on the Slopes, author Amy Manemann gives readers a light, quick romance with a smart, strong, and feisty leading lady and a sexy and complex Italian love interest.  Jessa is a believable character whose strengths and weaknesses make her endearing. Along with Jessa comes a slew of interesting siblings (all whose names start with the letter J), who will each be featured in supplemental installments in the Hartley Series books.  Manemann does a great job of giving enough information about the siblings to get a pretty clear picture of each of them, and readers are going to love this spunky family.  In Dominic, (described as "sex and sin rolled up in one package") readers not only lust after him, but they learn enough about Dominic's heartbreaking past to sympathize with him and really cheer him on in trying to win Jessa's love.  The storyline is somewhat predictable, and though readers will be relatively sure about how it will all turn-out, the path getting there is lots of steamy fun (and happily, the sex scenes are not spelled-out).

While the story was fun and engaging, it had a considerable number of typos and errors (starting with one in the first sentence) and some awkward sentencces that I found distracting (hence the 3.5 rating). I expect these will be corrected in upcoming digital copies, but it was a disappointment that the editing hadn't been more thorough before publishing, especially given the number of published books under the author's belt. (To Manemann's credit, she was gracious and appreciative of my constructive criticism.)

Thank you to the author for giving me an eBook copy of this book in exchange for my honest review -- the only kind I give. 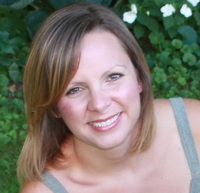 ABOUT THE AUTHOR: Amy Manemann is an International Best Selling Author. She writes sexy and intriguing romantic suspense, contemporary romance (NEW), young adult paranormal romance, and dabbles in children's books. She resides in her hometown along the Mississippi river with her husband and their two children. When she isn't plotting her next book, she enjoys spending time with her family and friends, and diving into a good book. Amy is also a site administrator for the World Literary Café, an online literary community for authors and readers.
Connect with Amy on her  BLOG
Posted by Kristine at 2:30 AM