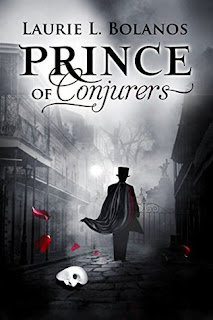 
As Gaston Leroux's classic Phantom of the Opera ends, Laurie L. Bolanos's debut book Prince of Conjurers begins. Erik (aka the Phantom) has faked his own death and has followed Christine and Raoul to New Orleans with the intent to make Christine belong to him forever. With the help of Voodoo Queen Marie Laveau, Erik devises a plan to summon Christine's soul into another woman's body. When the plan goes amiss and the soul of Juliana François, a troubled woman from the future, appears instead of Christine's, it becomes increasingly clear that it is more than Voodoo controlling outcomes. In a story that jumps between the present, the past, and the future, and where there are incarnations and reincarnations, Laurie Bolanos takes readers on a wild ride to an even wilder conclusion.

Reading Prince of Conjurers is much like peeling an onion; there are layers upon layers of plots and sub-plots that finally reveal a central, shining core. What makes the complexity work is Bolanos's strong characterization and the careful inclusion of details that make the seemingly unconnected, finally connect. Bolanos's version of Erik is mystical, but also very human with a wide range of emotions and growth that will surprise hardcore Phantom fans. Also surprising to Phantom fans will be how Christine stays in the background of the story despite her being Erik's obsession for much of the book. Instead, Juliana François becomes the primary focus of the book -- and Erik's life. Juliana's experience of being a modern white female going back in time and into the body of a black woman in the 1800s provides painful reminders of the injustices towards women and anyone of color in that era. The elaborate descriptions of period dress and scenery also add a layer of authenticity to the story, making it sometimes feel like historical fiction.

The slow reveal of the main characters' back-stories and various side-stories make it seem impossible that the author could possibly connect the dots for a cohesive ending -- but Laurie Bolanos does it and even manages to pull in a completely unexpected shocker, showing impressive writing skill. Though the story is well-done, the book could be improved with another editing sweep to clean-up the various writing errors (including my pet peeve: punctuating decades). The errors are a bit of a distraction and often removed me from the story. Prince of Conjurers explores a variety of concepts, from Biblical to mystical, that will leave readers with plenty to think about long after the covers are closed. Hopefully, readers can look forward to more stories from the creative mind of author Laurie L. Bolanos.

This book was reviewed for Reader Views and is re-posted here by their permission. A print copy was provided to me in exchange for my honest review -- the only kind I give. 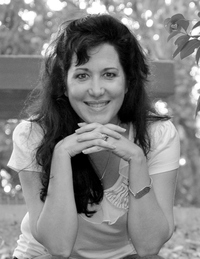 ABOUT THE AUTHOR: (from her website) Laurie L. Bolanos lives below sea level in a small cottage on the edge of a city shaped like a bowl. When given the opportunity, she doesn't mind hopping a few states over to enjoy  Gulf breezes and to dip her toes in the ocean.  She likes to take long walks on the beach, sip the occasional piña colada, and soak in the rays of the sun.  No matter the venue, her preference is to be barefoot. However, she will bend to social expectations and don a pair of shoes when necessary.

She enjoys attending a monthly drumming circle at which she was, in fact, told she has a "natural ability." Loving the vibrations of the drum, she has also invested time with tuning-fork therapy, although she has not yet been certified in the art.

Laurie comes from an Italian family and can prove it with her DNA results from 23andMe which has confirmed that she is 40.4% Italian. Other nationalities need not feel left out as she also has French, German, British, Irish, Iberian, Balkan, Sardinian, Scandinavian, Ashkenazi, Middle Eastern, West African, and Yakut ancestry, proving by her very existence that we are one world and should not be divided by race.

She started writing Prince of Conjurers in December of 2008 and plugged away at it until giving you the completed version you now hold in your hands. Although it is her debut novel, she insists there are plenty more stories swirling around inside her mind, so keep an eye out for more titles in the future. Hopefully the next book won't take so long!