Author's Blurb: IN A WARPED HEAVEN, SHE MUST CHOOSE HER FATE: OBEDIENCE OR REBELLION

The Ceruleans: mere mortals infused with power over life and death. Five books; one question: If the might of the heavens were in your hands, would you be sinner or saint?

When Scarlett Blake chose life-after-death as a Cerulean, she expected to grieve for all she left behind: her boyfriend, her best friend, her mother, her home. But at least Cerulea, her heaven, would be… well, heavenly. Right?

The world in which Scarlett awakens is very far from her idea of a utopia. Picturesque, sure, and serene. But there can be no paradise within the unforgiving walls of a prison, be they of cold, hard stone or beautifully blue water.

Now Scarlett faces her hardest decision yet: be a good, dutiful Cerulean, or be true to herself and fight for freedom.

And if she can find a way to escape, what then? Can she finally reunite with her lost sister? Can she save Sienna from the murderous Fallen? Can she evade her destiny with the Ceruleans?

Can Scarlett Blake ever reclaim her life-before-death… or must she let go of all she loves?

AHHHH!!! This series!!! Wild Blue Yonder picks-up right where Forget Me Not left off, with Scarlett awakening (reincarnating?) into Cerulea.  There had been plenty of hints that Cerulea may not quite be what was promised, and Scarlett realizes quickly that there is much more to "Becoming" than she could have ever dreamed.

I whipped through this third book in the series and am still so in love with it! Wild Blue Yonder steers away from the romantic element, though there is plenty of pining and yearning and saucy dreams to remind readers of what Scarlett left behind in leaving Luke. Instead, this book delves more into the mystery of the Cerulean world and even a little closer to the Fallen world. It's clear the fire between Scarlett and Luke hasn't dimmed in their separation, and their love continues to be a constant in the background, which will make readers wonder if the young lovers have a future yet. Several new and interesting characters are introduced, including Mother Evangeline of the Ceruleans -- who seems to have secrets of her own. Scarlett's quest to save her sister, Sienna, finally comes into focus and towards the last third of the book, along with the Sienna story line comes some surprises. The book has a lovely, satisfying ending that assures me I'll be starting book four immediately.

As has been shown in the previous two books, Tayte is a fabulous writer and really manages to project Scarlett's feelings so that readers experience her frustration, pain, angst, and fear.  And the world building is terrific, with the beauty of Cerulea drawn in stark contrast to the ugliness it hides.

I recommend this series for older young adults. The main character is eighteen and living as an adult on her own. Though not so much in this book as the others, there is consensual sex happening (not descriptive), regular overindulgence in alcohol, and some references to drug use in the other books. American readers will notices differences in punctuation and encounter unfamiliar vocabulary and word spellings since the author is British, but it just adds to the whole other-worldliness for me.

After reading the first book, I was super excited to see a giveaway of books 1-3 on Sharing Inspired Kreations and was ecstatic that I won.  So this book, like the first two, was read for pure pleasure and my honest review given with no strings attached. 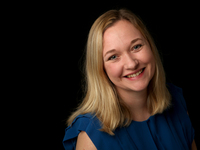 ABOUT THE AUTHOR: Once upon a time a little girl told her grandmother that when she grew up she wanted to be a writer. Or a lollipop lady. Or a fairy princess fireman. ‘Write, Megan,’ her grandmother advised. So that’s what she did.
Thirty-odd years later, Megan is a professional writer and published author by day, and an indie novelist by night. Her fiction – young adult romance with soul ¬– recently earned her the SPR’s Independent Woman Author of the Year award.
Megan grew up in the Royal County, a hop, skip and a (very long) jump from Windsor Castle, but these days she makes her home in Robin Hood’s county, Nottingham. She lives with her husband, a proud Scot who occasionally kicks back in a kilt; her son, a budding artist with the soul of a palaeontologist; and her baby daughter, a pan-and-spoon drummer who sings in her sleep. When she’s not writing, you’ll find Megan walking someplace green, reading by the fire, or creating carnage in the kitchen as she pursues her impossible dream: of baking something edible.