Nere has never understood why she is so much more comfortable and confident in the water than on land until the day she learns the shocking truth—she is one of a group of kids who have been genetically altered to survive in the ocean. These products of the "Neptune Project" are supposed to build a better future under the waves, safe from the terrible famines and wars and that rock the surface world.


But there are some big challenges ahead of her: no one ever asked Nere if she wanted to be part of a science experiment; the other Neptune kids aren't exactly the friendliest bunch, and in order to reach the safe haven of the new Neptune colony, Nere and her companions must swim across hundreds of miles of dangerous ocean, relying on their wits, their loyal dolphins and one another to evade terrifying undersea creatures and a government that will stop at nothing to capture the Neptune kids ... dead or alive.


In The Neptune Project, author Polly Holyoke has created an unusual and interesting twist to the dystopian story.  Though the book is somewhat typical with its ruined planet and evil government, genetically altering children to survive and thrive underwater is definitely a unique and engaging premise. There is minimal information presented about the state of the world on land (or how it got that way), but it's enough for readers to know that the earth and its inhabitants are in serious trouble. The excellent world building is done around the underwater world, which is where the majority of the story unfolds. Holyoke definitely knows her sealife, and  instead of forcing lessons about the damage being done to the earth and seas, the author does a great job of subtly referencing the ecological impacts humans have made so that readers will recognize them in their own lives. For example, the main characters have to swim through water that tastes "bitter and oily," oxygen "dead zones," and islands of floating trash.  The effects on the humans and the dolphins in the story give readers a different perspective -- an underwater one.  There are also subtle messages about the value of all things living and specifically dolphins, who prove themselves critical to the success of the kids' mission.

The book is told in first person point of view, from main character Nere. Readers aren't ever told Nere's age, though she's under fifteen. This is a bit frustrating as she even celebrates a birthday, but no age is ever given. Despite the first person point of view, readers don't get to know Nere as intimately as would be expected. (I'm hoping for and fully expect this to be remedied in the next book.) Some of the secondary characters seemed better fleshed-out, but again, it is difficult to reconcile their actions with their ages. This is particularly apparent with Nere's awkward love triangle/square (and yes, there is a good boy and a brooding bad boy) and also with ten-year-old Robry, who is the most intelligent and mature of the group -- Nere values his input above everyone else's, but she talks to him like he's a little boy. At times, the story drags a bit because it's just more of the same over the kids' thousand mile journey, and then new elements are suddenly introduced very near the end. Clearly, The Neptune Project is just one part of a bigger story, and as such, it lacks a clear turning point or real resolution -- but the story builds to a nice set-up for the sequel.

Holyoke uses clever formatting so that readers can clearly tell when characters are speaking telepathically, and the format of the dolphins' telepathic communications is different from humans', which will help younger readers keep their characters straight. The writing is pretty basic with lots of dialogue, and the story is action-packed, making the book a good choice for reluctant readers. The author does a great job of writing towards the intended audience -- middle graders -- but adults will be more incredulous and likely struggle to suspend their disbelief as much as is needed to smoothly read the book.

The Neptune Project has scenes that include violence and death (both human and animal), sometimes without remorse, and there is some kissing and an emphasis on needing a boyfriend or girlfriend. Younger readers might get a little nervous with the intensity of some scenes. It's tough for me to nail a recommended age because the writing is fine for fourth or fifth graders, but the content is really solid sixth to ninth grade level.

Thank you to Lone Star Literary Life Blog Tours and the author for providing me a print copy in exchange for my honest review -- the only kind I give. 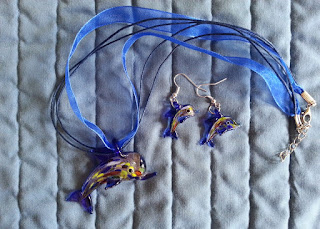 CLICK for Author Q&A and on 9/9/15 for a  review of The Neptune Challenge,
the sequel to The Neptune Project! 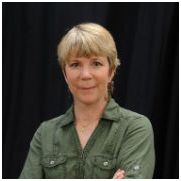 About the Author: Polly Holyoke is a former teacher and loves reading, camping, skiing, scuba diving, and hiking in the desert. She lives in Plano, TX with three rescue dogs, two spoiled cats, and a nice husband who tolerates piles of books all over their house. Her debut middle grade novel, The Neptune Project, was selected to the 2014-15 Texas Bluebonnet Master List along with state reading lists in Maryland and Ohio. Her second novel, The Neptune Challenge, was released by Disney/Hyperion in May.
Learn more and follow Polly Holyoke and her books:
Facebook    Her Website     Twitter     Goodreads